SNAP: Happily Ever After? by Michele Drier 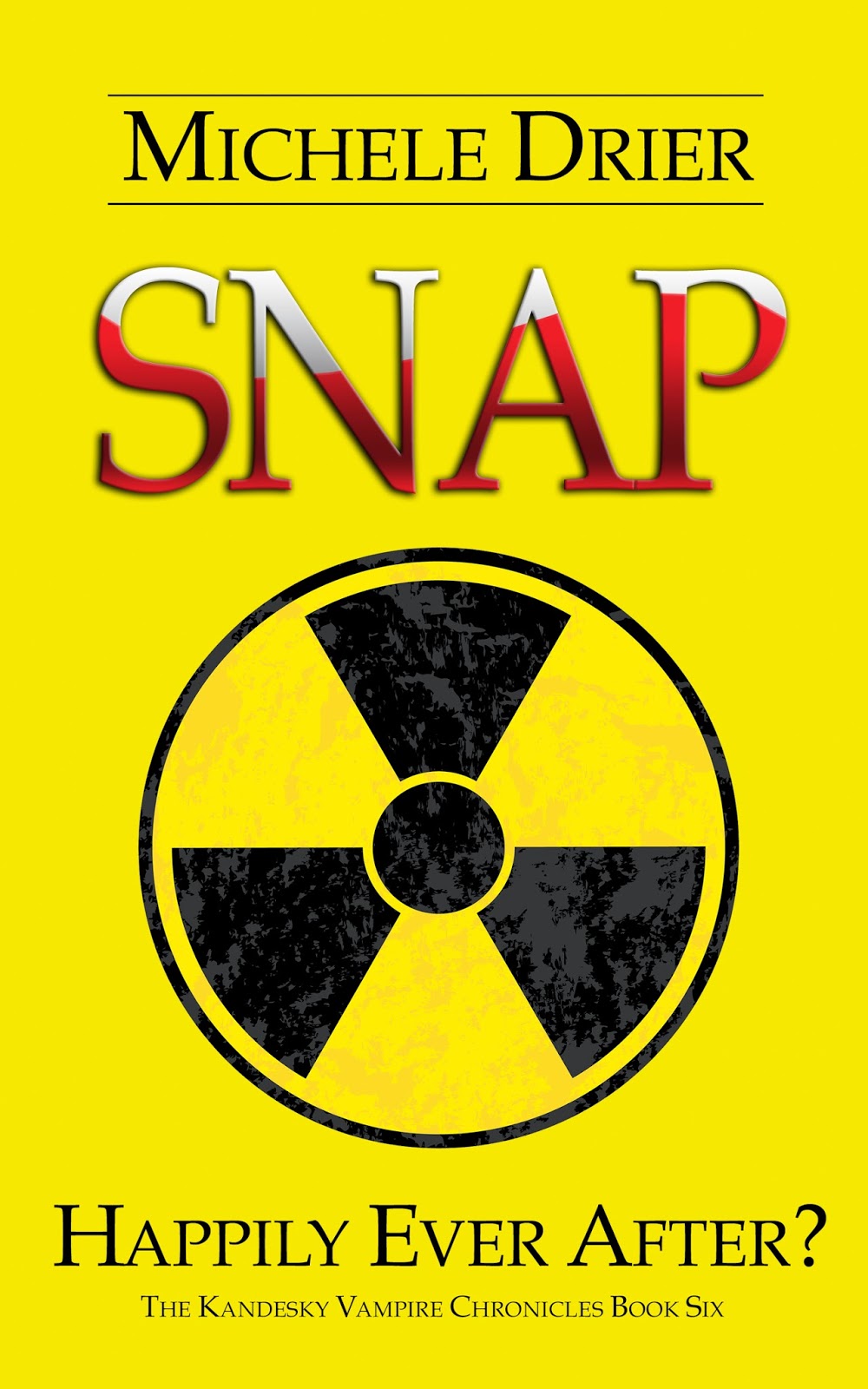 Loving Jean-Louis for eternity doesn’t mean that Maxie Gwenoch will let him turn her. Jean-Louis is a vampire, is gorgeous, is the second-in-command of the Kandesky Family of Hungarian vampires, and is her boss at SNAP, the multinational, multimedia celeb gossip empire where she is the VP for International Planning. She moves to Kiev to build a home with Jean-Louis and finds her future under a cloud from Leonid, a rival from the Huszar family, now living in a bolthole in the ruins of Chernobyl. Will Maxie find safety by giving up her days and joining Jean-Louis in the vampire nights?

Download SNAP: Happily Ever After?  from Amazon and Barnes and Noble.

Had I forgotten Leonid? Oh no, I’d never forget him.

He’d captured me, held me hostage for Jean-Louis, beat and raped me, let his toady Jules rape me. Much of the immediate horror of that time was pushed so far back in my mind that it took an effort of will to bring it out, but the fact that it happened never left me.

And I hadn’t forgotten that Leonid got away after the murder verdict and execution of Matthias, the head of the Huszar family.

“You said he couldn’t be found. You said there were only some tales of people and animals going missing in Romania and Belarus.”

His glimmer dimmed then flared back again, a sure sign he was going to try to convince me of something. “It’s true, we believed he was disappearing back in to the countryside. He had no contacts, no money and only a few followers. We didn’t think he’d try and head for Ukraine, but he did. He still had a small nucleus of followers here in Kiev.”

There was no oxygen in the room. I couldn’t breathe. My heart pounded. I knew Jean-Louis saw that. He may not have hunted and killed humans for food for more than 500 years, but his instincts were still there. I tried to keep myself calm around the Kandeskys, hoping they’d forget I was a regular. Fat chance.

On occasions like this, with blind panic and fear running along my nerves and affecting my circulatory system, the vampire’s internal hunting responses started to kick in.

He looked at me. “This is not something I wanted to tell you and I certainly didn’t want to tell you until we had a chance to decipher the information coming in. I had a very different ‘Welcome to Kiev’ planned.”

OK, I knew he’d explain things. But, wow, I didn’t even think that Leonid would be part of the explanation. He watched my eyes fill with remembered terror and reached over to hold me, but I pushed him away.

“And when were you planning to tell me this?”

He sighed. “Nik and I planned an evening with you. We’d tell you about Leonid then go over all that we knew and all that we’re planning to neutralize him. I, we, never want him coming within miles of you ever again.”

I flashed back to my first glimpse of him, standing on the steps of Nik’s mansion so coldly angry that the air around him looked crystalline. “I hope your anger wasn’t part of the plan.”

He threw his head back and laughed. “You ninny! Even teasing me, you do entertain. No, of course not. Now you’ll have to wait. Nik’s already gone up to his room.”

He looked at me, gazed around the room and looked back. “What’s the matter, you don’t like the accommodations?”

I threw my reader at him and followed it up with a pillow. He was fast, batting the pillow back hard enough to knock a gasp out of me. I found a breath. “No, I wasn’t expecting to be put up in an economy hotel. And where’s the help?”

“We were going to hash all of this over with you until you forced a change of plans. You’re going to have to wait for this, too. I will say that we had other ideas about accommodations, but we’re having to use a fall-back position. And until yesterday, we didn’t have one.”

He was up, pacing, a movement I knew well. His mind worked more creatively and clearly when he was on the move. Then his pacing stopped as he threw himself down on the bed next to me, turned my face to his and kissed me, so hard, so long and so deep I melted from the heat that rose to engulf me.

“My love, my love.” He was murmuring into my hair. “I’m desolate without you. If you’re not around when I expect you to be, I panic. I know I react badly, in what looks like anger, but it’s fear…fear of losing you.”

His hands were stroking my hair and moving down my back, then he started pulling my shirt up.

“What do you have on? Where’s all your lingerie? Didn’t you pack it?”

I all but giggled. There were times when I even slept in one of his old shirts, so that I had his scent with me, but tonight I’d been too upset to want anything of him around. And sexy lingerie to sleep alone! No way.

“No thanks to you, but yes, Elise and I packed some things. Of course I don’t have anyone here to help me…”

I stopped. He was helping me. Sort of. He managed to pull the tee over my head, which trapped my arms, and began kissing and slowly licking my breasts, working his way down my body. The bed shifted and I heard sounds of clothing coming off, the soft snick of buttons and the hiss of a zipper. As tangled as I was in the tee, I hadn’t managed to get an arm free before I felt the length of his naked body against mine.

Now I truly melted and lived for the sensations he brought to me.

As I came back to consciousness, I was aware of movement in the room. I opened my eyes to the faintest glimmer of dawn and saw him silhouetted against the window as he pulled the heavy drapes shut.

He turned to me. “It’s six, true dawn is still half an hour away. I’m leaving now. We’re planning dinner and a long conversation tonight. No matter what, remember that I love you for eternity.”

I slept, my body remembering his touch and my mind drifting in an ocean of caring.

Without Elise to wake me, I jerked upright from a deep sleep, disoriented. Where was I? What time was it? The room was dark. I groped around on the bedside table, found a lamp and flipped it on. Memory came washing back. Last night, the wretched fight, Nik’s guest room, Jean-Louis…ah, Jean-Louis. I lay back on the pillows remembering the last look of him closing the curtains…oh, crap! What time was it? I was supposed to meet Jean-Louis and Nik for dinner and a discussion.

I rolled back over and checked. Four in the afternoon. Enough time to shower and get ready, even without help.

The tap on the door came as I was putting the final pins in a wrapped updo. He came in and I stood. I’d chosen a short, layered dress the colors of autumn leaves and strappy two-inch Via Spigas and felt confident enough to hear what the two had to say.

Jean-Louis looked me over and smiled. “I knew when we offered you the job that we’d chosen well. A woman who can overcome adversity, a few little bumps along the road, and still come up looking good enough to eat!”

This time I picked up a pot of blush to throw but decided I didn’t want to waste perfectly good Lazlo on him. He knew I hated those stupid vampire cracks, made them only to push my buttons. I gave him the evil eye as I sailed out the door.

Something was wrong. Something was missing. I looked around as Jean-Louis joined me and took my arm. Bam, that was it. No demons!

Even after the execution, I had demon guards outside the door to my suite in the Baron’s castle. Though the Huszars may have been scattered or co-opted, their centuries-old headquarters was only a few miles away and Stefan Kandesky and Jean-Louis didn’t believe in taking chances.

Here in Kiev it was pleasant being able to come and go without a trailing demon, as fond of them as I’d become.

Under the freedom of not having a guard, though, there was a twinge of nervousness.

Download SNAP: Happily Ever After?  from Amazon and Barnes and Noble.