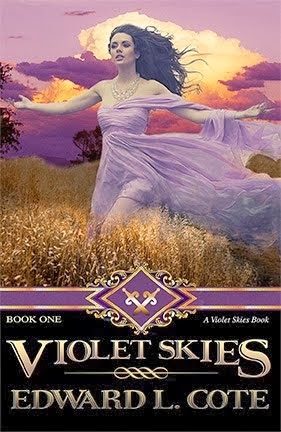 To break up my writing time, I design book covers for fellow authors. Here’s my latest cover design and a bit about Edward L. Cote’s Violet Skies, the first book in his new series of the same name.  Each book is a novella, short and easy to read. This is a fresh twist on classic fantasy, but it keeps its essential nature intact.

Taya Mindaerel and her mother, the Oracle of the Prairie Winds, must flee their home or face certain death at the hands of a dark hunter and his man-eating horse. Their journey takes them to Aurum, the City of Gold, where they seek the aid of the Great Magus Olbinaar.

On the way they meet three allies- Alex, a vagabond, Brand, a master swordsman, and Ogger a wild creature. They will need all the help they can get to surmount all the obstacles in their path.

In the city however, they learn that their journey has just begun.

Download Violet Skies on Amazon and Smashwords, or purchase the paperback.

Olbinaar stood in the Grand Library of the Hall of the High Council. Two stories of books lined the walls, which were divided by oak doors at regular intervals. Six ladders granted access to the higher bookshelves. Two huge windows stood opposite each other, displaying grand views of Aurum, the City of Gold. Through each he could see the city’s aqueducts, markets, buildings and towers short and tall. The window on the western side brought light from the setting sun.

The blue robes Olbinaar wore and the insignia decorating them spoke plainly of his station and power as a Great Wizard of Aeovas. Long years and hard days had worn upon his face. Thick gray hair formed half a ring around the bald spot on top of his head and matched his well-groomed but bushy beard. His blue eyes studied the room, and his stocky frame stirred impatiently.

Olbinaar turned to find a younger colleague entering the room. “Dibian,” he said. He offered a slight bow, a courtesy not returned. “I’m waiting for the Council.”

Dibian closed the door behind him. “Yes, I know.” He wore not the blue robe of his official position, but his own black robes of fine silk. His flippant self-indulgence and habit of overeating gave him a large gut and a soft visage, but his weight was not the first thing most people noticed when they saw him. No, that would be the damnable smirk he always had on his perfectly shaven face. He kept his brown hair trimmed with the same meticulousness, but that did not draw the eye in the same way.

“You’re out of uniform,” Olbinaar said, adjusting his own robes proudly.

“Trust me, you’re the only one who cares.” Dibian walked over to a table, where he found a bottle of blue wine that had been left for Olbinaar. It was an excellent vintage, carefully crafted from blueberries and four other fruits, each more rare than the last, then aged for decades. Dibian examined the bottle’s markings and nodded in approval. With a quick gesture, he chilled it. He poured himself some of the rich dark blue wine in a crystal glass. “Are you sure you don’t want any?”

The elder wizard shook his head. “I hate to think of what that bottle must be worth. I wish the Council would spend its taxes more wisely than on attempts to impress us.” He sighed. “But frankly, I’m wondering what’s keeping them so long.”

Dibian smiled. “I wouldn’t worry about it.”

Olbinaar scoffed. “Really? They’re scared, Dibian. Ultimately, there’s no telling what they will do. They must have some reassurance that we won’t simply run roughshod over them, but what . . .” he lowered his voice, “what can they really do to protect themselves?”

The younger man peeked over his glass, clear blue eyes shining. “What indeed.”

Olbinaar allowed himself a small smile. “This is unlike you. I’ve grown accustomed to you opposing everything I say out of habit.”

Dibian laughed quietly. “Whose habit is that, old man? I do what I do for my own reasons. It is you who always react to my moves, and second-guess my motives.”

Just when he thought his colleague might say something to soothe the sting from that barb, Olbinaar saw something through the western window. Three explosions lit the evening sky, quieted by distance. People filled the streets with panic.

For a second, Olbinaar stood shocked, but he roused himself to action. “The city is under attack! We must warn the Council!”

“The Council is dead,” Dibian replied flatly. He took a drink of wine then set his glass down on the table.
Olbinaar’s knees wobbled. “What? Are you mad? How do you know this?” He started off toward the Council Chambers. “If this is some kind of prank—” Another explosion tore the top off of a tower. Rubble fell to the streets below in a violent cloud of dust. Olbinaar stopped walking when he saw it through the window, which shook with the roar of the blast.

The silence stood thick, until broken by another explosion, this one closer to the window.

Olbinaar turned to face Dibian with eyes wide in shock. “Why?”

The younger man laughed. “Why? Isn’t it obvious? Did they think they could ride us like donkeys? Or leash us like dogs? What good is a law, against us? Against this kind ofpower?” As if to punctuate his words, another explosion shattered the great window behind him. Glass shards rained on the wizards, but both protected themselves with shields of their own power, raised by well-trained reflex. The wind howled through the broken window.

Dibian raised his voice. “Pieces of paper won’t stop this. When Ruegar went mad and took it upon himself to exterminate the rest of us one by one, what did they do?”

“There was nothing they could do!”

“Are you mad? What gives you the right?”

“What right do they have to try to bind us with their laws? And now this latest farce? Do they expect us to surrender the very means to defend ourselves?” Dibian shook his head.

Olbinaar slowed his breathing, and closed his eyes.

The murderer sighed. “Would you prefer it if I turned them into puppets? I’m fed up with even pretending to subjugate myself to those petty politicians. We all are, whether we admit it or not.” He paused. “It will be better for us to rule openly. You’ll see.”

The elder frowned. “You mean for wizards to rule the world? What of democracy?”

Dibian laughed. “Democracy is the rule of the best con artist. Let those who have true power rule over those who do not.”

The explosions continued, growing more intense. Olbinaar knew there had to be a terrible panic in the streets, and untold dead and wounded. What he could see would not be the half of it. He looked out the broken window, a breeze blowing his robe and beard. He asked, “Are you doing this somehow?”
Dibian scoffed. “What would I have to gain? This city could stand to be redecorated, but there must be some easier way to do that.”

Olbinaar rounded on him, but before he could speak, Dibian scowled and said, “Who do you think it is out there? Telaron and Sela are in the city as well, and that makes four. Did you really think Ruegar would pass up a chance to come after four of us at once?”

Olbinaar sighed. “I did not know you were here, or that you had brought your lover.”

“Ah yes, but I am, and I did. Hmm.” Dibian paused to take a fig from the tray and bite into it. “I wonder if he simply followed me here. I’ve made no secret of my whereabouts.” He finished the fig and licked his fingers. “Oh well. What’s done is done. Ruegar is here, and I know none of you can defeat him alone.” He walked over to the broken window and put a finger to his lips. “Perhaps . . . I could . . . but I’ve too little to gain to risk my life on those odds.” Dibian looked down, where Olbinaar could see a crowd running through a street below. The murderer looked back at Olbinaar with that arrogant smirk. “It seems we’ll have to work together this time.”

Olbinaar looked out the window, at the fire and crumbling buildings. He knew what Ruegar wanted— he was trying to smoke them out. He also knew that he could not hope to defeat Ruegar the Mad on his own, but Dibian had some skill in magical combat, and his lover Sela was twice as fierce as any man. Olbinaar’s apprentice Telaron might already be dead, but if he were not, only swift action would save him. Justice for Dibian’s crimes would have to wait. The only way to prevent much more bloodshed was to fight alongside a half-mad devil of a woman and a cold-blooded murderer.

Olbinaar growled, frowned, and fumed, but there was nothing else he could do. He looked over his shoulder and said, “For now.”