Everville: The City of Worms by Roy Huff 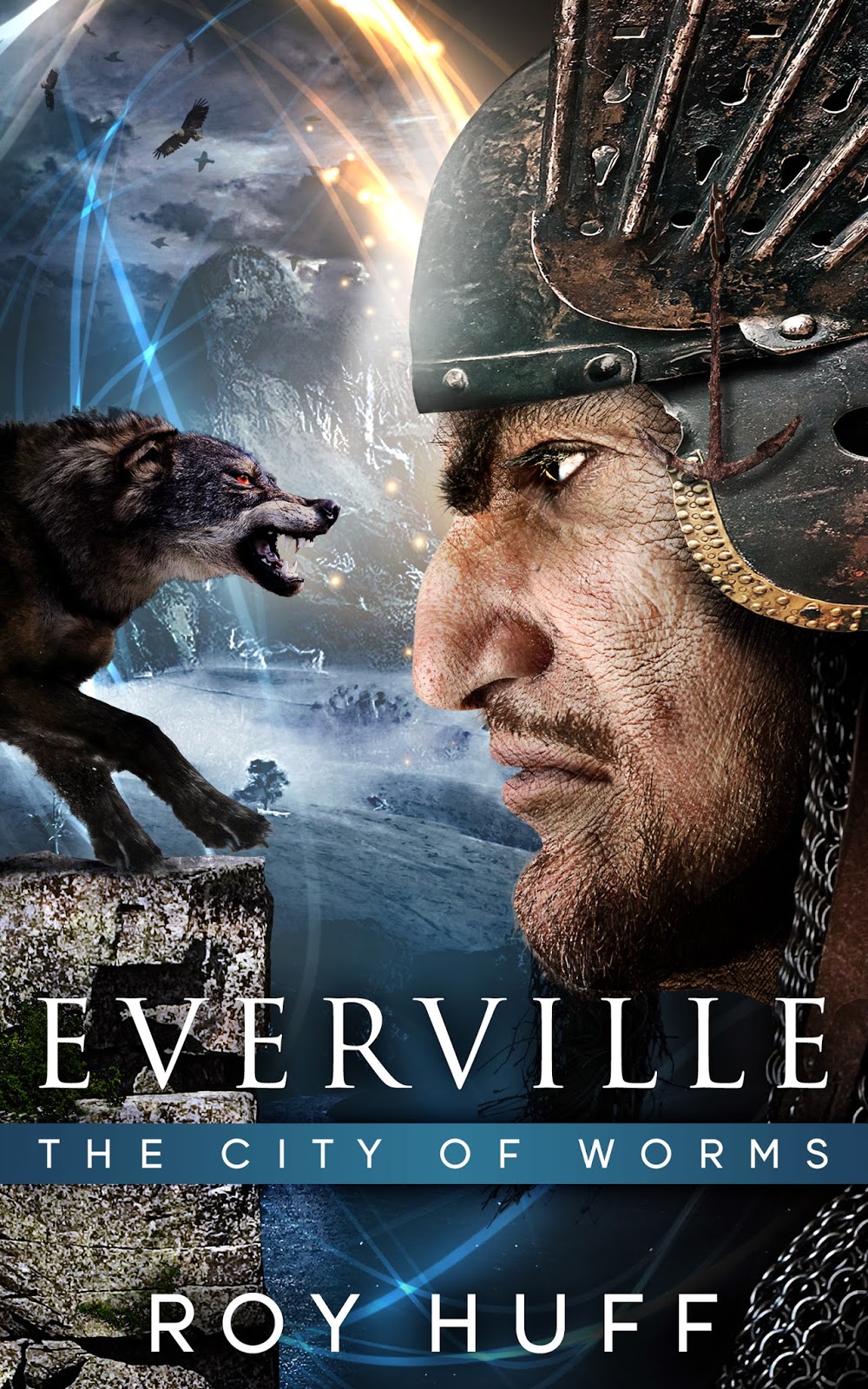 College freshman Owen Sage has just started to understand the darkness trying to overtake Everville and the earthly realm. With the help of The Keeper and the Fron army, Owen has managed to buy some time, but new problems have already emerged, new secrets need to be revealed, and the race against time to stop Them from conquering both dimensions has only just begun. The Keeper, Owen Sage, and his friends at Easton Falls University must now battle threats from within. To do it, they must reunite with familiar creatures and join forces with new ones as they navigate their journey to the truth that awaits them in Everville.

The City of Worms is the second book in the Everville series. You can download it on Amazon, where it will be FREE November 14-18!

As he turned the first few pages of discolored notes, doodles, and other markings that he had scribbled on the margins, ‘Ubaloo’ was written at the top of the second page. Next to the word were small drawings of creatures that looked like tiny people, sketches of a humanlike race with perfect musculature, warriors who would intimidate even the bravest of men — that is, if they weren’t a mere twelve inches tall.

More notes were written below the images, foreign-looking letters and shapes. Next to the markings were etchings of the Fwaylan, ferocious doglike animals that resided in The Valley of Darkness.

Cleophas thumbed through the pages and skimmed the words he had written down so long ago. The notes were full of guesses and disconnected theories, but there was one common thread: there was an apparent convergence in Brackenbone, the land of the Ubaloo. It was a place the sketches depicted as one of the eight surrounding lands of Everville and a few days journey west of the Deep Woods, which was connected to The City of Worms across the vast expanse.

Cleophas turned the page. Stuck in the center was an old photograph of Dala. He pulled the photo free, and as he did, his eyes drifted sideways while he reminisced on some of the wonderful moments they had shared together. The shock of her passing had long ago given way to a resolute determination to give her life meaning. Even now, his face exuded a clear focus, undeterred by the reminder of her death or the current situation with Dante, who had been in a coma for the last couple of weeks. His eyes returned to the photograph before he put it back in its previous resting place and stood up from his kneeling position.

Meanwhile, in the brutal desert above the land of the giants, Oldrik, The Keeper who had betrayed Everville, paced back and forth as he pondered his options.

Elmer, one of Oldrik’s three Fron followers, standing at attention said, “Oldrik, what do we do now?”

Elmer plopped down on the ground in frustration, only to snap back up a few moments later. The intense sunlight scorching the ground made it unbearable. “Ouch!” was the word that escaped his lips as the rest of his body shot into the air. The Fron winced as the searing hot dirt burned his rear end. Nickelsized, fluid-filled blisters formed on the portions of Elmer’s thighs that weren’t covered by cloth.

Oldrik continued to pace a few minutes longer, ignoring Elmer’s painful lapse in judgment, and then he spoke.

“The Keeper and Owen’s stupidity will be Everville’s undoing. We must journey to the Dark Forest and discuss the matter with Them,” Oldrik said while thrusting his long wooden stick into the ground, searching for a hollow spot.

“Let’s do it! Let’s do it!” Elmer said as he limped along, unable to hide his injury.

“Yes. Let’s do it!” said Calvin, the other of Oldrik’s Fron followers. With those words, Oldrik’s rod found a weak spot, and the ground engulfed them as they collapsed into the land of the giants.

Oldrik managed to find his footing, and then took notice of the absence of the giants that were supposed to inhabit the area. “Let’s get moving,” he said as he picked Elmer up by his collar and helped him to his feet. Oldrik himself, however, was tired and slow, as were the rest of his followers.

Portions of the walls were covered in patches of faintly luminescent insects that lit up sections of the caverns. These were followed by areas of complete darkness, which lasted tens of seconds, and as they made their way through the underground passageways their skin darkened and shriveled. The brief periods of darkness made their physical changes appear more apparent with each revelation of glowing light. The Fron that followed Oldrik had started to lose the vibrant appearance that their species was known for, and Oldrik himself began to look more tired and aged than a typical Keeper. Despite their sluggishness and disturbing transformations, they continued for hours, and before long they had made substantial gains in their distance.

From atop the stairwell in his Everville workshop, The Keeper looked down at Sako’s assistant Toe and began to speak. “Oldrik and the others have abandoned us. Even now they are conspiring against us. They are misguided and will likely fail, but we can’t afford to ignore them.”

“So what can we do?” Toe said as he looked up at The Keeper.

“We will do what we have always done, and what we will always do. We will seek the truth, and the truth will guide us to the answer. It pains me to see Oldrik and our fellow Fron, whom we have known for ages, fall for the deceit that is the great lie. It’s an internal struggle that we all face, a battle from within that never ceases to rage. At any moment, we can allow ourselves to believe the falsehoods that are spread by our adversaries and the fabrications that Them have convinced even their own kind to believe. It’s this lie that has led to the creation of Them, and it is this lie that has convinced Them that we are the enemy.”

The Keeper turned and looked through the portal wall. He watched from a distance as Oldrik and the others transformed from their previous state into disgusting, hideous creatures.

The Fron who walked alongside Oldrik shrank and shriveled. They looked at each other in dismay as the final consequence of their betrayal manifested itself. Each of them stared with horror at their hands, which had begun to throb. After expending a surprising amount of effort due to the agony, they held their hands in front of their faces and watched as their fingers grew in length and narrowed in width while the tips pulsated
and enlarged to the size of large grapes that looked as if they were about to explode. Sharp nails grew several inches from their now engorged fingertips, and slime oozed out of their pores and began to wrap around their bodies. They writhed in pain as the same thing happened to their feet. The process, which had started off slow, had gradually accelerated and was now almost complete.