Daughter of Nothing by Eric Kent Edstrom 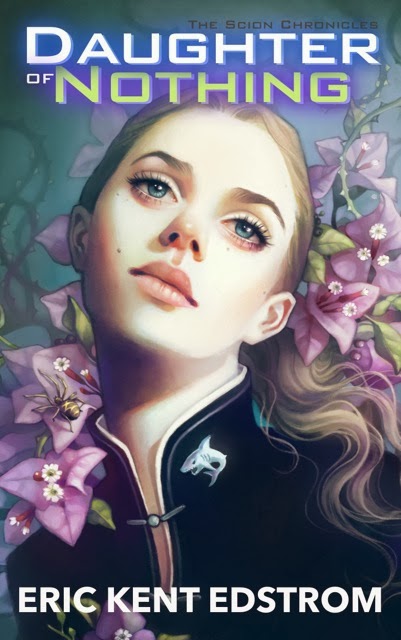 Few people even know that the Scion School exists. Tucked away on a private Caribbean island, the school is host to thirty-six exceptionally gifted students, all orphans. They train and study every day to prepare themselves for an immense responsibility, to lead humankind back from the brink of extinction.

At least, that’s what they’ve been told.

Among the thirty-six is Jacey, 17, one of four Scions in the Eagle class. She is the favorite of the 93-year-old headmaster, Dr. Carlhagen. But when Jacey overhears a conversation between a strange visitor and one of the school’s first graduates, she learns a stunning fact about her future. One that Dr. Carlhagen has kept from all the Scions.

Following the cryptic clues given to her by the school’s AI professor, Jacey races to untangle the truth of who the Scions are, and what the headmaster really means when he says they are bound for a great destiny.

Daughter of Nothing, first in The Scion Chronicles, is available in ebook and paperback. You can download it at Amazon, Barnes and Noble, Kobo and iTunes.

The girl waved for Jacey to stop, which was very strange. Belle had done so much to avoid Jacey that something had to be wrong if she was waving Jacey down. Maybe she had sprained an ankle or something.

Jacey almost kept going. But if Belle was truly injured . . .

She left the path, picking her way through the jagged rock and Turk’s Head cacti. “What’s wrong?”

Belle faced her, hands on her hips. The glove tucked in her waistband caught Jacey’s attention. And where was the glass object she’d been carrying?

Jacey sagged. “Did you really wave me over just to insult me?”

She turned to find two boys from Vaughan’s Nine standing behind her. Horace, a tall, rail-thin boy who rarely spoke, and Kirk, his exact opposite, short, squat and thickly muscled.

They took position to block her way back to the main path.

“What’s going on?” Jacey demanded. The menace in Kirk’s eyes sent a chill over her skin.

Belle clasped her hands before her and strolled forward. “You asked Sensei the other day when you were going to be punished. And I know you were denied your virginity examination. At least I don’t think Wanda lied about that. I’d like to help you with at least one of these problems.”

Jacey’s blood froze and she backed away. The boys took hold of her arms.

“I figure we have a few options,” Belle said, stepping closer. She smiled, showing an even row of perfectly white teeth. Jacey had never seen Belle smile before, and it sent another shiver over her skin.

Belle stepped even closer, so that her shadow fell over Jacey. “Kirk could deliver the punishment. Blow for blow, the exact punishment Vaughan received.” She tapped Jacey’s ribs and the side of her head to show the spots the kicks would land.

“But no. That would break your ribs and skull. You might even end up in a coma.” She caressed Jacey’s forehead, face full of mock concern.

Belle’s fingers slid from Jacey’s temple down to the waistband of her running shorts. She pulled it down an inch on one side. “The virginity test . . . I’m afraid that’s not my area of expertise. Though I’m sure Kirk here might be willing to try.”

Jacey acted without thought. She may never have learned kung fu or muay thai, but she had studied ballet for years. She kicked, wildly. Belle threw up her arms, which absorbed most of Jacey’s attack. But the strike drove her back.

The boys still held Jacey in their steely grips. Horace swept her feet from under her, slamming her flat on her back. Jagged rocks bit into her flesh, forcing a cry from her lips.

Kirk swung a leg over her and in a second wrapped her in a jiu-jitsu submission hold. Jacey struggled to breathe. The blue sky overhead started to blacken.

Belle held a jar. She brought it close so Jacey could see what was inside.

A shaddle spider. The tan arachnid was two inches long from the back legs to the probing front ones. Yellow markings, like slashes, crisscrossed its back.

To read the rest of Daughter of Nothing, download it at Amazon, Barnes and Noble, Kobo and iTunes.

*** Time is running out to register for the workshop that will give you all the tools and tips you need to write your novel faster and better than you believed possible — and have so much fun you’ll make monkeys in a barrel jealous. Sign up today. ***