Forged By Greed by Angela Orlowski-Peart 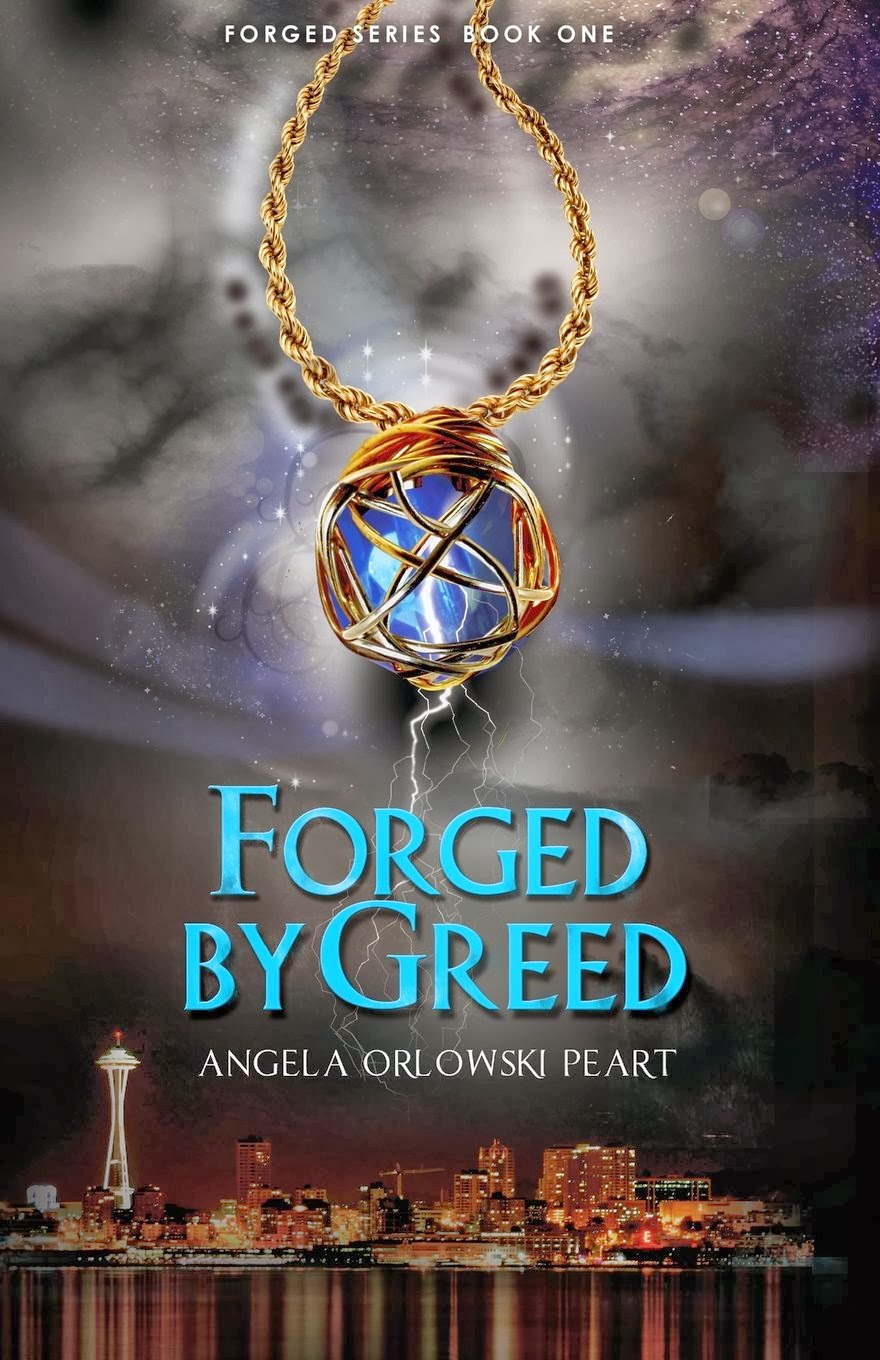 Two Seattle 16-year-olds, Jatred and Jasmira, are not your typical star-crossed lovers. They are not even your typical Shape Shifters. Sure, they try to live an ordinary life. At least, as ordinary as the Prince and the Princess of the rivaling ancient Races–the Winter wolves and the Summer leopards–can live. But eventually they learn that not much about their existence can be normal. Especially when the Races’ two commanding Goddesses are involved.One of the Goddesses is on a quest to tilt the scale of power to her side. The other will never let it happen, even if it means kicking Jatred and Jasmira’s love to the curb. Nothing is off limits, including removing Jatred’s memories of Jasmira.

To complicate things even more, there are the Universe’s powers to consider. They are trapped in an ancient Amulet in order to protect the stability of the world. But the Universe has a mind of its own, and when the powers are unleashed, the forces of nature are disturbed; earthquakes, tsunamis, and volcanic eruptions shake the Earth. All Shifters of both Races are summoned by their respective Goddesses to fight in the name of, or against, the normalcy of the world.

Forged by Greed, book 1 in the Forged series, is available on Amazon and Barnes and Noble.

“We are in the Summer Realm? How the hell did you get me here? I’m a Winter Shifter.” Jatred shot up to his feet.
“Relax. It’s only an illusion, remember? The Amulet did this.” Jasmira looked at him, dazed.
“No, no and no! This is not happening. Get me back to the Human World, J. Now! I’m serious. Get me out!” His eyes flicked around. “Get me out before Crystal finds out. Don’t you understand?” he shouted, frantic. His heart raced, and his blood pounded in his ears.
Jasmira felt like someone just dumped icy water over her. She was confused, but fought to stay focused. She had never seen Jatred panic before, and this sobered her. “Okay,” she whispered. Her mouth was trembling. “But I don’t know if I can. The Amulet… the Goddess.”
She squeezed her eyes. Her breath was shaky and shallow. Her body shimmered in and out, taking on an ethereal appearance then becoming physical again.
“J, what are you doing?” Jatred whispered, frightened. “Look.” His eyes slid to the Amulet dangling down from her fist. The blue stone shone, lit from the inside by a pulsing source of light.
Jatred gripped Jasmira’s hand. This time his fingers didn’t go through like they did before, when she appeared as an illusion. Her body was solid again. She held onto the chain halfway between the jewel and the clasp. The clasp flew open. One side of the chain encircled his wrist. The other part snaked around Jasmira’s wrist. Unexpectedly, it bound them in a vice-like grip. The metal felt as cold as a sheet of ice. They both yelled and tried to pull free, but it wouldn’t budge.
A spiraled script became visible on the jewel’s edge, the symbols shone like liquid gold. The teens frantically tried again to yank their hands away. The runes kept crawling around the gem, barely touching its surface.
“What’s going on? What is this?” Jatred growled. A sudden gust of wind tousled his hair.
“I don’t know. What does it say?” Jasmira shrieked. A storm broke around them. The wind became so strong, it made them stagger. They struggled to stay on their feet, turning their faces away from the wind to breathe.
“The letters look almost Arabic, but that’s not it.” Jatred tugged on the chain once more, this time with both hands.
Jasmira momentarily lost her balance, but regained it quickly. She shouted over the storm, “Stop pulling. It’s not working. Concentrate on getting back to the Human World!”
“What? How—”
“Just do it!” Her features twisted with horror. Sweat trickled down her back, and she shook with panic.
They tore their eyes from the lazily spiraling runes and looked at each other. Jatred saw the Summer Goddess in his peripheral vision and turned his head. But she wasn’t there. A cold fear crept on his sweat-covered skin. He swore and squeezed his eyes. His uncle’s smiling face came to his mind. Jatred whispered hastily, “Imagine someone from the Human World.”
Jasmira concentrated on Penelope’s features, and felt a rush of hot air over her face and body. She heard Jatred grunt in pain, and everything went still.

Winter Realm.
Crystal stood motionless, looking like a glittery ice statue. Her eyes rested on Jatred’s frozen form covered by mounds of snow. She was deep in thought, and her face mirrored the turmoil inside her. Two huge ravens—the first Royal couple, Freki and Geri—sat in one of the trees on the edge of the clearing. The Goddess turned her head to look at them. They made a series of clicking noises, then cawed loudly, and sailed down to circle above her head, still croaking. She made an impatient gesture. “You’re annoying.” Her voice sounded clear in the frosty air, although her mouth didn’t move.
The ravens plummeted toward the ground, shifting in mid-air into two huge wolves. The animals landed on their paws. A low growl rumbled in the back of their throats. They walked slowly around Jatred’s frozen shape, their lips curled back.
Crystal watched them in silence for a while. Finally, she said, “I should listen to you and simply eliminate him to remove the danger of the ten-thousand-year mark. The Shifters could choose a new King or a Queen, and the world would be safe again. At least for a while. But I’m getting soft in my old age. ”
One of the wolves, Geri, quietly growled and snapped his jaws dangerously close to Jatred. Freki snarled much louder. Her muzzle wrinkled as she exposed her sharp canines. The Goddess shook her head. Reluctantly, the two animals moved away from Jatred. They walked toward the woods and disappeared between the snow-covered trees.
The Goddess closed her eyes and raised her arms to the sides. Her palms were up, and there was a luminescent moon shape on each of them.
“Jatred, my child,” she said with her mind.
Something in him started to awaken, as if from a deep sleep. Various images began a sluggish parade through his mind.
“Rise.” Crystal moved her arms up.
She became completely visible, looking like a regular young woman—a stunning young woman. Her dark hair glistened in the sun. Small, almost heart-shaped lips stayed motionless. The Amulet around her neck reflected sunrays, sending hundreds of tiny blue specks to dance on her half-covered breasts, bare shoulders, and neck.
She wore a white, knee-length sleeveless cotton dress. The hem was embroidered with tiny, glittering snowflakes, reminiscent of those coming down from a cloudless sky. The top of her white boots’ shafts were turned out, revealing thick silver-white fur. The shafts were embellished with white decorative inlays and stitching.
A thick pillow of snow, covering Jatred’s body, cracked and large chunks started to slide off. Like an ancient warrior, he rose in a slow but determined motion, uncurling his arms and lifting his head. Taking a deep breath, he opened his eyes and looked at Crystal. Jatred tilted his head back and shook his hair, then knelt on one knee.
“My Goddess,” Jatred said in a raspy voice. “Did you summon me?”
Crystal smiled and touched the Amulet. “Do you know what this is?”
“It’s the Amulet.”
“Do you remember you are the one to keep and protect it with your own life?” Crystal continued her investigation.
Jatred’s brows drew together, forcing his smooth forehead to crease. “Yes, I remember. Our Race has it in their possession right now, before it must pass back to the Summer.”
“Do you remember fighting one of my Garhanans?” Crystal’s smile disappeared.
“A Garhanan?” Jatred said the name slowly, shocked. “No. Did I do something wrong?”
“Yes, my child. But you are forgiven.” She looked at him sharply. “Actually, I want you to forget that Garhanan for now.” She slowly moved her hand in front of his face.
Jatred felt as if something cold stabbed at his brain. He winced and squeezed his eyes, staggering to the side.
Crystal seized his wrist and touched her other hand to Jatred’s cheek, making his icy pain subside. She smiled and took his hand in hers. “Now I will send you back to the Human World.”
They walked together, not leaving any tracks in a deep undisturbed snow. From behind, next to the tall broad-shouldered Jatred, the Goddess looked like a slender teenage girl. Soon their bodies started to shimmer and dissolve in the cold, winter air.