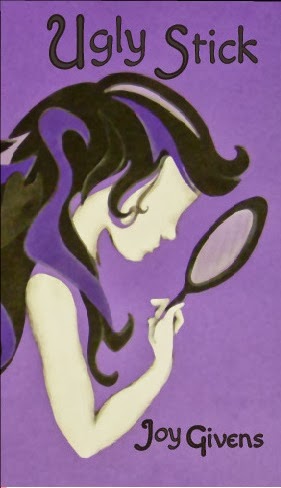 Fifteen-year-old April Somerfield is a shy, self-loathing misfit who would blend in with the wallpaper, if only the wallpaper were a little less attractive. In a family line of gorgeous, successful women, April’s a fluke. At Prescott High School, she’s a walking punch line.

A school project sends April on the hunt for her mother’s mysteriously missing yearbooks, and upon finding them she uncovers a big secret. It turns out that being “hit with an ugly stick” is a surprisingly literal occurrence in April’s family tree—a curse has been passed down from mother to daughter for centuries. But when April sees a chance to finally ditch the family curse, she must decide if becoming beautiful on the outside is worth giving up the person she is meant to be.

Download Ugly Stick from Amazon and Barnes and Noble.

We watched from the living room as Mom’s car rolled out of the driveway. Ani wrestled with her typical curiosity for about four seconds before bursting out, “So what’s with your mom and yearbooks?”

“I know, right?” I said, throwing up my hands and dropping onto the couch. “The weirdest part is, when I talked to Grandma, I specifically asked her about Mom’s yearbooks, and she swore Mom has them.”

Ani sat down next to me. “Have you ever seen a picture of your mom in high school?”

I thought, and suddenly it dawned on me. “I’ve never seen a picture of her from before I was born,” I said slowly. The picture of Mom holding me at three days old, which sat on the shelf a-bove my dresser, between my baby rattle and my old teddy bear, was the earliest picture of Mom that I had ever laid eyes on.

“Not even a wedding picture?” Ani exclaimed.

“No, their photographer forgot to take off the lens cap… oh, snap, do you think that was a lie, too?”

My head was spinning. One little white lie about the whereabouts of Mom’s yearbooks was bad enough, but the thought of her systematically lying to me for most of my life? It made me dizzy.

“Why wouldn’t there be any pictures of her?” Ani mused. “Ooh! Could your parents have been spies or something? Or may-be you’re all in the witness protection program, and you don’t even know it!”

“But my dad puts his picture everywhere for work,” I pointed out. “His name and office phone are on every ‘for sale’ sign he puts out.”

“Have you seen any younger pictures of him?” Ani asked.

“Yeah,” I said, “he’s got a few pictures on his desk of him and his dad on fishing trips and stuff from when he was little.”

“So, what is it about your mom, Apes?” Ani questioned. She laughed suddenly.

“I was just thinking it’s funny,” she explained, “that this seems like a mystery your mom might read for work… only it’s about her.”

“Huh. Yeah.” I wrinkled my nose. What would one of Mom’s detectives do? Either look for clues or interview witnesses, I sup-posed. Interviewing anyone was out of the question; Mom wouldn’t talk, and neither would Dad or my grandparents, I expected. That left looking for clues.

I glanced at Ani, who must have been reading my mind. “Attic?” she asked me.

“I’ll grab flashlights,” I said, jumping up and sprinting to the laundry room. We ran up the stairs, through the office, and into the large closet that hid the stairway to the attic.

I only went up there twice a year, to help with Christmas decorating and de-decorating. Our attic was unfinished and cob-webby, with exposed beams and puffy pink insulation poking out here and there. Ani shifted her weight uncomfortably. She was petrified of spiders.

“Where should we start?” I asked, eyeing the stacks of cardboard boxes and plastic bins. “We’ve got an hour, tops.”

Ani and I surveyed the massive hodgepodge doubtfully. “Well, let’s ignore anything marked ‘Christmas,’” I decided aloud, “and focus on things that look like they haven’t been disturbed in a while.”

I felt proud of my limited detective skills. I started pawing through a pile of dust-covered boxes in one corner while Ani gin-gerly worked her way across a metal shelf.

After several minutes of hard labor, I spotted a large, ex-tremely dusty trunk in the corner, behind some of the boxes I had moved. “That looks like it hasn’t been moved in forever… do you think?”

Ani and I approached the trunk, which had a combination lock with four digits slipped through the brass latch on the top. “What should I try?” I whispered. For some reason being hushed seemed necessary.

“Your birthday? Grandparents’ anniversary?” Ani said. I tried my birthday, both 0-2-0-8 and 2-8-9-8, with no result. “Maybe we need to invert the numbers European-style,” she muttered.

If we tried that, we would be spinning dials for hours. I turned the digits to 0-8-0-9, Grandma Jo and Grandpa Frank’s anniversary. It produced a satisfying click, and the lock fell open.

“I can’t believe that worked.” I whispered. I lifted the lid with shaky hands.

What was sitting patiently right on top? None other than an old Nor’easter, upon dozens of books and photo frames.

I glanced at the year; Mom must have been a junior then. We ignored the rest of the trunk for the moment and flipped through the pages together.

“K… M… P,” I browsed quickly, looking for the page of juniors that contained my mother’s name. I perused the page line by line for “Pinckley, Diane,” and found it. She should have been the third picture in the row, after “Pilsner, Thomas,” and “Pin-kett, Laura.”

“They made a mistake,” Ani said with a shocked laugh. “That’s not your mother!”

She jabbed her finger at the third face, which, other than being a white female, could not possibly have looked less like my mother. Where there should have been a heart-shaped face, a model’s smile, and a perfect nose between big eyes, there were a heavy jaw, braces, and a beaky nose crowned by enormous glass-es. I had to sit down on the grimy floor, because I suddenly felt faint. This girl looked so much like me and nothing like my mother.

“I don’t think it’s a mistake,” I said weakly. That incredibly unattractive face in the yearbook belonged to my mother, just like I did.

Read the rest of Ugly Stick from Amazon and Barnes and Noble.