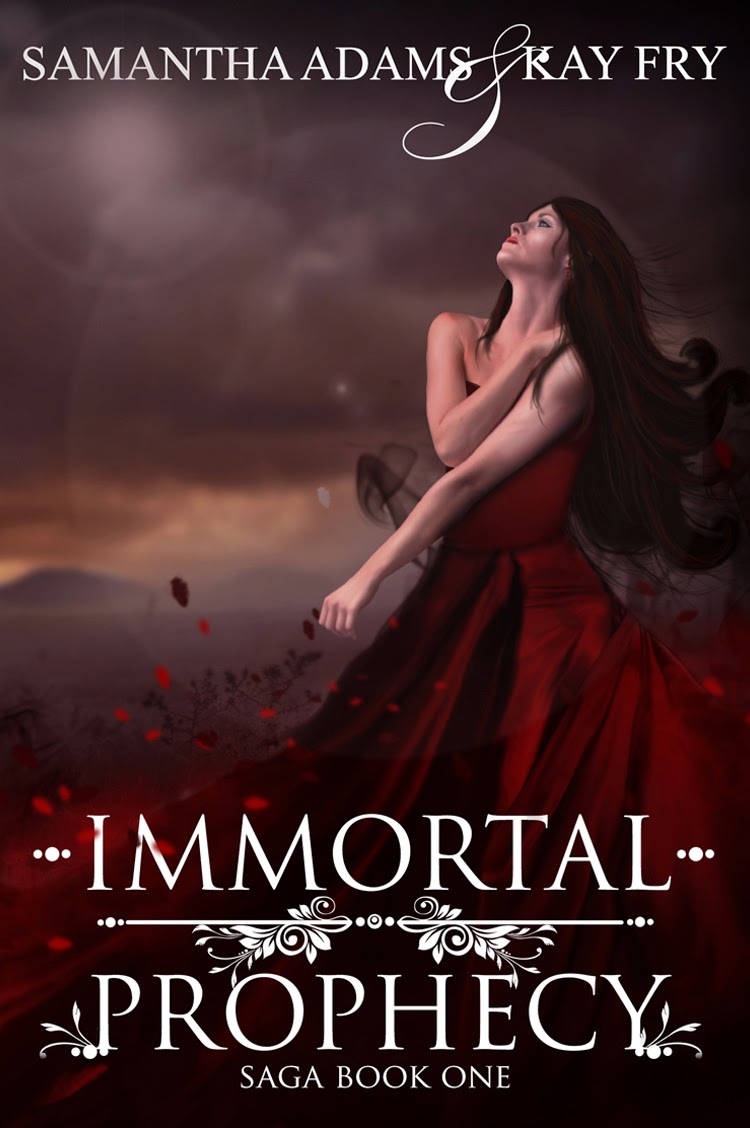 When Alessandra goes to visit a fortune teller at sixteen years old, she has no idea of the repercussions that will haunt her for the rest of her life…

Five years after that life changing night, she meets the evil vampire, Vincent whose fate is tied in with hers according to an ancient prophecy, and she finds herself in a terrifying situation, literally staring death in the face.

After a narrow escape, the secrets that people closest to her have been hiding come rushing to the surface…Alessandra soon discovers the world as she knew it doesn’t exist…and she is not what she thought she was…

He’s gorgeous, dominating, and gets under her skin whether she likes it or not. Alessandra fights the connection she feels with the smouldering immortal, but they seem to be connected by a thread of fate she cannot escape, no matter how hard she tries.

Will she succumb to his ruthless pursuit and find the courage to save the immortals and mankind from the vampires?

In this scene, Alessandra has gone to visit a fortune teller with her best friend, Kathryn. It is here that she learns of the prophecy that will change her life forever…

“Alessandra,” Madame Isabella began, the tone of her voice becoming ominous and foreboding. Ally felt a shiver of dread run through her body. She should have listened to those instincts and gotten out of here, but no…

“You are a hunted woman, Alessandra. Two men are bound to you by destiny, but both have very different purposes. James Carlisle has been sent to protect you. Trust him with your life, he is your guardian and soulmate. Vincent, the other man, wants you dead…” She paused as she looked into the crystal ball, her eyes widened slightly and her lips parted in surprise. “Someone you love is keeping a secret from you that will shatter your world and change your life in ways you cannot imagine. You are not who you think you are, Alessandra.”

Ally, was vaguely aware of Kathryn’s arm around her. The feeling of dread had completely absorbed her to the point that she was paralyzed with fear.

“Are you ok, Ally?” her friend whispered, while giving her arm a squeeze.

Ally’s only response was a vague nod.

Madame continued, “Two people close to you will die, you cannot stop this. It is all meant to be and will mark the beginning of the prophecy…the prophecy you were born to fulfil.”

Ally’s breath caught in her throat. “Prophecy? What prophecy?”

“You were born to save an ancient race and kill Vincent. He will die at your hand if the prophecy is fulfilled.” The fortune teller paused for a moment, feeling desperately sorry for the sweet innocent girl sitting before her, but she knew that hiding the truth from her would ultimately lead to her demise. She leaned over and grabbed Ally’s hand in an effort to offer her some comfort. “The destiny that has been chosen for you will not be an easy one, but you were born to do this. No matter what do not lose hope, if you lose hope, then you have already lost, and you will die. Vincent will win, and the human race will be slaughtered with no one to protect them.”

Ally snatched her hand back as if it was burned. With a deceptively calm voice she said, “I want to go home, Kathryn. Now!”

“Of course,” Kathryn said as she helped her friend up.

“Ally,” Madame Isabella continued. “Remember that when you lose those people, things will have been set in motion that no one can stop. It will have begun.”

Unable to form any words, Ally glared at the woman, until Kathryn pulled her along and got her outside the tent.

Once outside, Ally felt like she could breathe again. They started walking so fast it was almost a light jog. Both were eager to get as far from that place as possible.

Madame Isabella watched the girls leave with a peculiar look on her face. “So the prophecy is true,” she muttered, shaking her head slightly in disbelief. “Poor girl, you have no idea what is coming for you.” A tear rolled down her cheek as she turned and walked back inside.

“I’m so sorry, Ally. I should never have forced you into that.” Kathryn felt dreadful for insisting that Ally have a reading too.

Ally was still walking without a destination in mind, the only requirement she had was to be far away from Madame Isabella. Kat was walking with her, gently guiding her through the crowds. She could tell her friend was not watching where she was going.

“Not a chance that was way too bizarre,” Kat said, trying to be reassuring. However, they both knew that it more than likely was true. Madame Isabella seemed to be the real deal.

“Right.” Ally smiled trying to perk up. If I don’t believe it, then it won’t happen, right? Losing two people close to her, Vincent, a guardian and soulmate named James. It was all too much. Then the reality of what she had been told hit her. The air was knocked from her lungs, she couldn’t breathe, couldn’t think, and then everything went black…