The Making of a Mage King: Prince in Hiding by Anna L. Walls 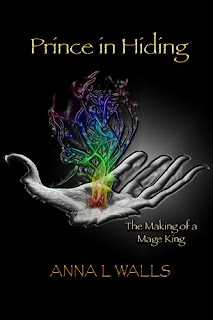 What would happen to you if you lost your parents at 17?

And then… what if they weren’t your parents at all?

When Sean loses his parents within a year of each other he can’t see past the tragedy… until he finds out his father isn’t really his father… and Sean isn’t who he thinks he is. Follow Sean through his journey to a magical world where he is royalty and his powers are only beginning to bloom… and family is a relative concept – evil uncles and all.

Prince in Hiding by Anna Walls is the first in The Making of a Mage King series that follows young Sean from boy to Mage King! You can download it on Amazon. Book 2 in the series, White Star, is also on Amazon.

Sixteen-year-old Sean stood in the queue, waiting his turn to compete with the saber. He looked up at the bleachers. He had no problem locating his dad; his parents sat in the same place every time. His dad was talking to their flat mate, Gordon; his mom couldn’t make it this time – she had to work. Every year since Sean’s first tournament, his parents gave him a choice. Since the tournament and his birthday were generally only a few days apart, Sean got to pick which event his parents would attend; it was impossible for them to get both days off from work. Sean thought of a compromise. He really wanted them to watch him compete, so as a birthday present of sorts, they could take him out for a special dinner afterwards.

When Sean, Gordon and his father returned home that evening, they were greeted by a squad car waiting out in front of their apartment building.

“Sorry sir,” said the officer as he met them at their taxi. Sean’s father was a sergeant of the mounted police. The officer looked uncomfortable about talking in front of Sean and Gordon.

“Sorry sir,” said the man. He hastily pulled his hat off his head and gripped it in his fists. “Sir, you need to come down to the station. It’s your wife, sir. She’s…she’s dead. You need…”

Sean didn’t hear anything else. The monotone of his father’s voice and the officer’s voice no longer translated into words. He found the hood of the police car and leaned on it, his sword case hitting the pavement with an audible thump.

Gordon wrapped an arm around his shoulders. “Come on, I’ll get you inside.”