Minutes Before Sunset by Shannon A. Thompson 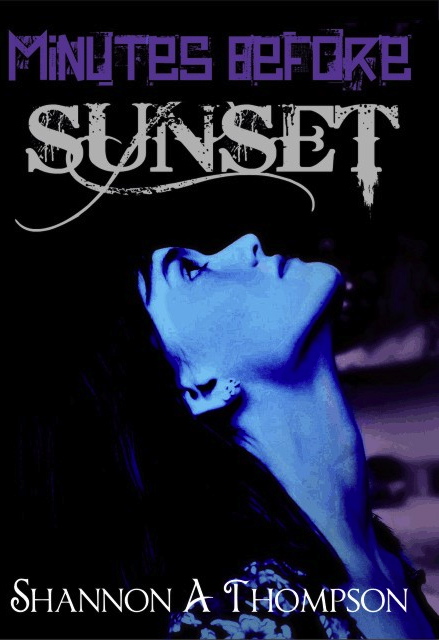 She was undoubtedly a shade, but I didn’t know her.

Eric Welborn isn’t completely human, but he isn’t the only shade in the small Midwest town of Hayworth. With one year left before his eighteenth birthday, Eric is destined to win a long-raging war for his kind. But then she happens. In the middle of the night, Eric meets a nameless shade, and she’s powerful—too powerful—and his beliefs are altered. The Dark has lied to him, and he’s determined to figure out exactly what lies were told, even if the secrets protect his survival.

He had gotten so close to me—and I couldn’t move—I couldn’t get away.

Jessica Taylor moves to Hayworth, and her only goal is to find more information on her deceased biological family. Her adoptive parents agree to help on one condition: perfect grades. And Jessica is distraught when she’s assigned as Eric’s class partner. He won’t help, let alone talk to her, but she’s determined to change him—even if it means revealing everything he’s strived to hide.

“Camille.” I grumbled as I moved through the lifeless forest, leaves crumbling under the pressure of my feet. I hated it when she played stupid games. It was cold, really cold, and I was wandering through the woods trying to find my guard. Despite being twenty-one, Camille hadn’t changed from the day she was assigned to me. She loved annoying me.

It didn’t matter that she was my guard. We were supposed to be together whenever possible, but, after twelve years, Camille was annoyed with responsibility. If she were assigned to an average shade, she’d be free during daylight, the only time we were allowed to be human, but she wasn’t. She was assigned to the first descendant. I gained my powers at my naming. I was thirteen, and four years passed quickly, even though everything had changed.

My father remarried to a naïve woman. The Dark was our life, yet she didn’t even know what the Dark was. Mindy was oblivious that she’d married a practical king, and she never would. The Dark was a secret for a reason. We protected the humans from evil, because they aren’t capable at determining evil for themselves.

The Light was evil, and it always had been. Forget archetypes. They’re completely wrong, and they always will be.

In our history, the Light and Dark accepted one another, but it wasn’t until the elders deciding separating our energies was the smart thing to do. Idiots. We turned on one another, and the power was taken away, only to return when the true descendants were born. Thousands of years later, that was exactly what was happening, and, lucky me, I was one of them.

Our prophecy was in the making, and the only thing the Light had to do to gain power was prevent the rest from happening. Seemed simple enough until everyone realized only the descendants held the power. In turn, only the descendants could fight the battle, and killing one of them would define who won.

No worries. No pressure at all. I shook my head as I stomped through the only forest in our small Midwest town. I only had to save my kind or die myself. At least I was aware.

I was raised with three simple rules:

2. Under no circumstances is it safe to reveal your identity. (Unless it’s Urte, Pierce, Camille, or anyone else the elders deemed an exception.)

The last rule is my favorite, because of the dishonesty. Win didn’t mean win. It meant murder. It meant I had to kill the second descendant, the power of the Light, and I had no choice. I would get blood on my hands.

I brushed my hand along the shivering trees as my gaze darted around the darkening forest. I rarely had time to leave our underground shelter and use my powers, and I didn’t feel like wasting my night chasing Camille around in the dark.I threw my senses out around me. The forest reeked of evergreen and pine. I could feel every prickly leaf and see every shadow. From stump to stump, I searched the darkness for Camille’s body heat. No one could avoid my radar.

Bingo. I grinned as I locked onto a girl by the river. I sprinted through the thicket, pushing pastscraping branches and leafless oak trees. As I neared the forest’s opening, my body sunk into the shadows, and my skin tingled as it morphed into the chilly air. It was the greatest feeling—other than flying, of course—and I relished in the moment. The blackness of night flowed with me as I floated along the trees, the leaves, or snow. I was enveloped in silk.

I only solidified when I reached the forest’s edge. Just as I thought, a girl stood on the river’s guardrail, but she wasn’t Camille.

She didn’t have Camille’s white hair or mischievous dark eyes. In fact, this girl didn’t even look Camille’s age. She was my age, and she had the dark hair, pale eyes, and the pale skin complexion that our sect had.

She was undoubtedly a shade, but I didn’t know her.

My fingers gripped my jacket as I moved backwards, trying to conceal myself in the darkness, but the girl spun around and stared at me. She was perfectly still when her purple eyes met mine. She didn’t budge. Instead, she pointed at me, and the dark magnetically trailed her fingertips.

“Who—” She stepped off of the railing, and her eyes widened. “Who are you?”

I put my hands in front of me and stepped out of the forest. This must be one of Camille’s illusion jokes.“Who are you?” she asked, backing up against the river’s guardrail.

I didn’t respond. Instead, I flew through the shadows and reappeared in front of her. My body heat escaped me, and she froze, completely petrified by my closeness. I laid my hand on her cheek, expecting her to disappear like any of Camille’s illusions, but she didn’t. She was real, and we were centimeters apart, teetering over the edge of the river.

She didn’t move. I had the ability to hypnotize any shade, but I hadn’t used any power. She was shaking—shivering—beneath my touch, and her heartbeat thundered her energy through my veins.

How odd. She was powerful, yet fear suffocated every bit of her being.

A shout split the air, and I sensed a body rushing through the forest. Camille was coming for me. “Where are you?”

Reflexively, I released the girl and turned to the forest, waiting for Camille to appear. Over here, I said, sending her a telepathic message. Immediately, she appeared in a beam of light.

Her dark eyes were ablaze as she picked sticks and dried leaves from her glittering hair. “What the hell, Shoman? At least tell me where you are going if you want to be alone.”

“I was with—” I closed my mouth as I waved my hand towards the nameless girl, but the ground where she once stood was empty. Nothing. No marks or anything signifying her leave. She was gone.Impossible. No shade had ever been able to stay off my radar, yet I hadn’t felt her leave. It was as if she had never been there.

“With who?” Camille asked, trudging up to me.

“Shh,” I held up my hand and threw my senses out.

Camille tensed, and her black eyes darted around. “What are you looking for?”

“Be quiet,” I said, spinning in tight circles. My senses were useless. Nothing was there. Not even a bat or a plane. I was being blocked.

I grabbed my guard’s boney shoulders. “Camille, who else was out here tonight?”

“No one. Everyone is at the Naming,” she said, rolling her eyes. “If you haven’t forgotten, you’re supposed to be there.”

“I don’t care,” I said, ignoring the ceremony of the last harvest. It was hard to forget. A thick layer of frost coated the dying grass, and I knew that the first layer had fallen yesterday morning. As the first descendant, I always went, but my father hadn’t in years, and I was beginning to forget the point.

Camille touched my arm. “Is something wrong, Shoman?” she asked, widening her eyes. “Was someone here?”

Thank you for featuring Minutes Before Sunset 😀
~SAT