The Carnelian Legacy by Cheryl Koevoet 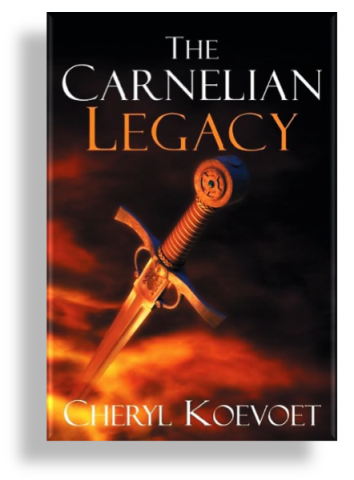 Marisa MacCallum always believed that the man of her dreams was out there somewhere. The problem is—he’s in another dimension.

After the death of her father, eighteen-year-old Marisa’s life is on the verge of imploding. She seeks comfort on her daily ride through the woods of Gold Hill, but when a mysterious lightning storm strikes, she is hurled into the ancient, alternate dimension of Carnelia where she is discovered by the arrogant but attractive nobleman, Ambassador Darian Fiore.

Stranded in a world teeming with monsters, maniacs and medieval knights, Marisa is forced to join Darian on a dangerous mission to negotiate peace with his archenemy, Savino da Roca. Along the way, she sees his softer side and quickly falls in love. But when she learns that Darian is locked into an arranged marriage, her heart shatters.

When Darian’s cousin Savino falls for her charms and demands her hand in exchange for peace, Marisa is faced with an impossible choice: marry the enemy of the man she loves or betray them both and become the catalyst for a bloody war.

The Carnelian Legacy is in ebook and paperback on Amazon, Barnes and Noble, Kobo and iTunes.