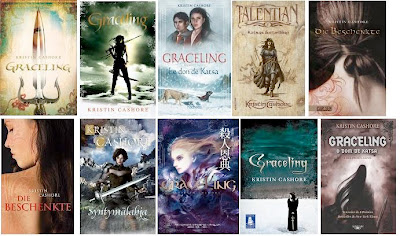 She caught the fall of every leaf in the garden, the rustle of every branch. And so she was astonished when a man stepped out of the darkness and grabbed her from behind. He wrapped his arm around her chest and held a knife to her throat. He started to speak, but in an instant she had deadened his arm, wrenched the knife from his hand, and thrown the blade to the ground. She flung him forward, over her shoulders.
He landed on his feet.
Her mind raced. He was Graced, a fighter. That much was clear. And unless he had no feeling in the hand that had raked her chest, he knew she was a woman.
He turned to face her. They eyed each other, warily, each no more than a shadow of the other. He spoke.
“I’ve heard a lady with this particular Grace.” His voice was gravelly and deep. There was lilt to his words; it was not an accent she knew. She must learn who he was, so that she could know what to do with him.
“I can’t think what that lady would be doing so far from home, running around the courtyard of King Murgon at midnight,” he said. He shifted slightly, placed himself between her and wall. He was taller than she was, and smooth in his movements, like a cat. Deceptively calm, ready to spring. A torch on the path nearby caught the glimmer of a small gold hoops in his ears. And his face was unbearded, like a Lienid.
She shifted and swayed, her body ready, like his. She didn’t have much time to decide. He knew who was she was. But if he was a Lienid, she didn’t want to kill him.
“Don’t you have anything, Lady? Surely you don’t think I’ll let you pass without an explanation?” There was something playful in his voice. She watched him, quietly. He stretched his arms in one flid motion, and her eyes unraveled the bands of gold that gleamed on his fingers.
“You’re a Lienid,” she said.
“You have good eyesight,” he said.
“Not good enough to see the color of your eyes.”
He laughed. “I think I know the color of yours.”
Common sense told her to kill him. “You’re one to speak of being far from home,” she said. “What’s a Lienid doing in the court of King Murgon?”
“I’ll tell you my reasons if you’ll tell me yours.”
“I’ll tell you nothing, and you must let me pass.”
“Must I?”
“If you don’t, I’ll have to force you.”
“Do you think you can?”
She faked to her right, and he swung away, easily. She did it again, faster. Again, he escaped her easily. He was very good. But she was Katsa.

Also, please visit today’s Mystery Sponsor (don’t lose your head over it or anything)…