Alien, Mine by Sandra Harris 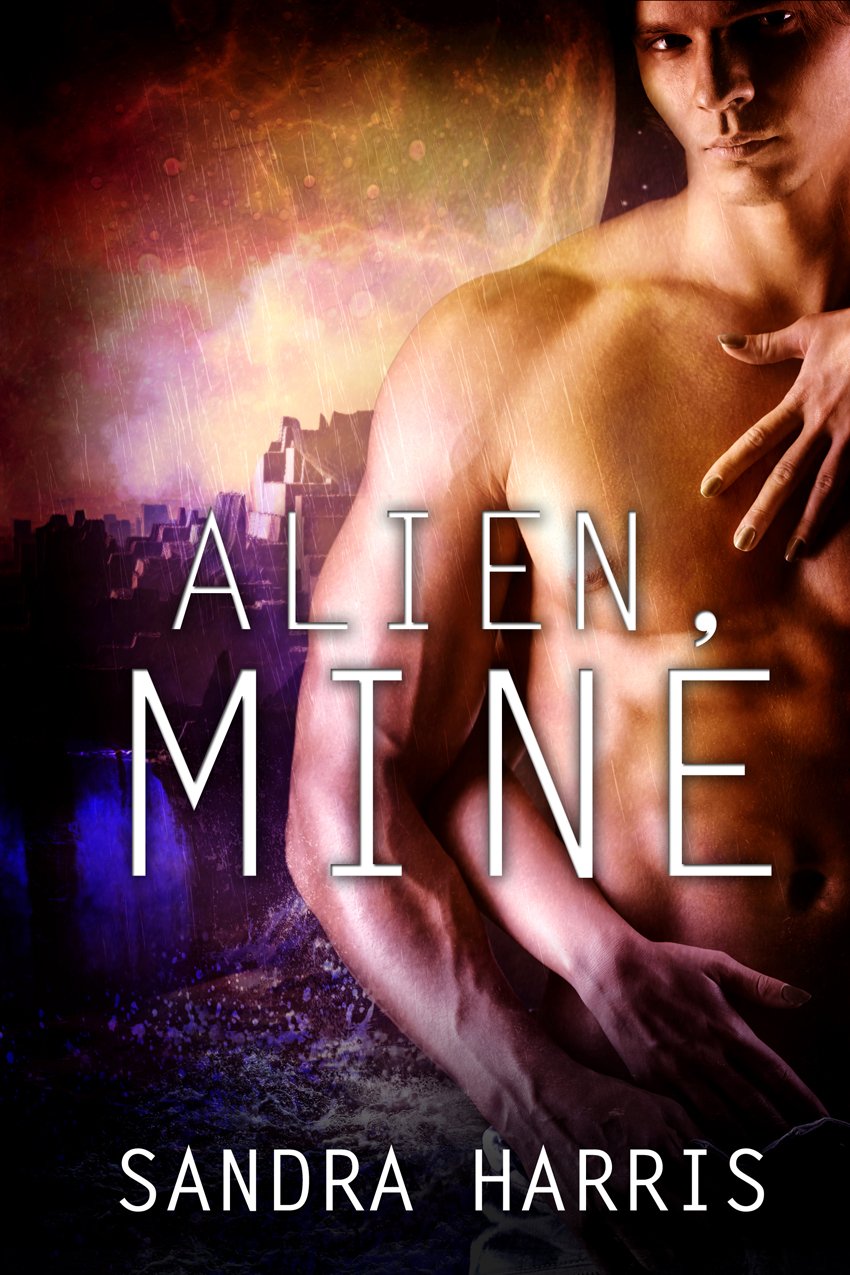 THE BLUTHEN HAVE ONE CONSUMING PASSION: THEMSELVES.

IN THEIR EXPANSION ACROSS THE GALAXY, THEY WILL GO TO ANY LENGTHS TO DOMINATE SPECIES THEY ENCOUNTER.

Torn from modern day Earth and stranded on the far side of the Galaxy, Sandrea Fairbairn must use every particle of courage she possesses to adjust to her new life and live for tomorrow.

Eugen Mhartak, a general in the Tri-Race Alliance Army, refuses to bow to the merciless Bluthen. Haunted by the loss of far too many innocent lives he has vowed to drive the ruthless invaders from Alliance space.

The strength and valor of Eugen Mhartak attracts Sandrea as no man ever has, but she struggles to read the enigmatic general’s heart. Determined to help him triumph over the Bluthen she uncovers a diabolical plot against the Alliance.

Drawn by the courage and exotic beauty of Sandrea, Mhartak battles to overcome the barriers of cross-cultural differences that separate them and claim her ardent interest. He must conquer his deepest fears to be the man she needs. When his principles are betrayed by his own government and he is faced with the impossible prospect of taking Sandrea’s life in order to save his home planet, Mhartak desperately searches for a way to keep safe both his world and the magnificent woman who has stolen his heart.

Fleeing Bluthen (the antagonists) hunting groups, Sandrea (the heroine), and a secondary character, T’Hargen (the hero’s long lost brother) have taken refuge in the house of a family recently murdered by the Bluthen. Sandrea has just been secretly adopted by the family’s empathic pet.

“What, no food replicators?” she asked.

“I beg your pardon?”

She flapped a hand at him. “Never mind. Long story.”

A quizzical frown crossed his brow. “This planet is recognized as an agricultural haven. People come here to pursue a simple life.”

He opened cupboards and drawers and pulled out plates and cutlery. Long strides took him to a refrigeration unit where he withdrew an assortment of food. A couple of minutes later, he placed a loaded plate on the table.

Okay, I won’t pry, not my business.

She stared down at the repast and an image of three fresh graves sucker-punched her vision. Her appetite fled.

“They would have been disappointed had we refused their hospitality,” T’Hargen murmured, “should they have been here to receive us.”

And that’s supposed to make it easier?

Oddly enough, it did. She would not disrespect this last generosity of the unknown family. She sat and speared a piece of fish with a two-pronged forked. A warm, strong, moist tongue flicked against the inner crook of her elbow.

Don’t get anxious, I’ll feed you.

T’Hargen seated himself across the table from her with his own plate.

T’Hargen stared at her as though she’d suggested the family indulged in the kind of activities that took place only when the planets aligned, under cover of darkness and involving naked skin, prosthetics, and oil. Possibly feathers.

She lifted a shoulder. “I don’t know. What sorts of pets are kept on this planet?”

His lids lowered then rose with his eyebrows. “Pets are not useful on a farm.”

“Ah, I see.” Got news for you, T’Hargen, pets are always useful.

She picked up a piece of fish in her fingers, placed it in her mouth, and bit off a portion.

“Some of the locals have not objected to caped lizards taking up residence in their external storage sheds. They keep the vermin down,” he said. “If you see one, though, keep away from it. They’re extremely dangerous.”

Yeah, they’ll steal your heart with just one emerald-eyed glance.