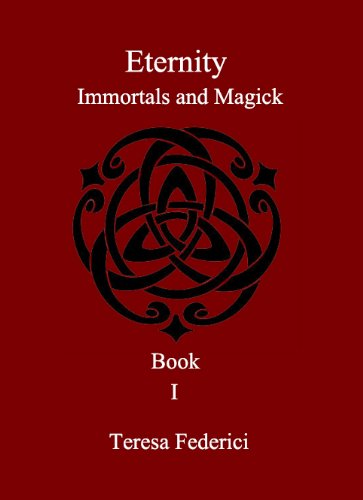 Anna Greer is a quiet microbiologist with her feet planted firmly in reality. Her life gets turned upside down when she finally meets her elusive employer, Gareth Macgregor. Gareth is mysterious, sexy, powerful…and a vampire.

Soon she’s drawn into a world she only thought was mythical, creatures and beings that existed only in nightmares that turn out to be very real.

Anna and Gareth are drawn together in a fight for their lives and Anna finds that there is a part of her that has lain dormant since her childhood, a power that could save them, or mark them for death.

Gareth’s powerful enemy would stop them from finding what Gareth has been trying to find for centuries—a cure for vampirism and a love that transcends time.

Download Eternity, Book 1 in the Immortals and Magick series on Amazon.

We stared at each other across the small space between us, our chests equally rising and falling. His strange brown eyes locked onto my green ones, and he moved toward me.

I put my hand out in a stop gesture, not sure where I dredged the strength from to accomplish it.

“Please, don’t.” I whispered, and what he heard in my voice must have stopped him from coming closer. “Look, Gareth, I don’t know what is going on here, but I can’t do this.”

“What do you think is going on here?” he asked. He ran his hands through his hair then shoved them into his pockets.

I shook my head futilely. I didn’t know.

“I think that we’re two people that are attracted to one another. You just happen to work for me.”

He tried to make it sound as though that’s all there was to it; just two people, man and woman, with an attraction between them. I could tell from his eyes he didn’t believe it.

“No, there isn’t anything more.” He ground out. He moved toward me again, and as much as I wanted to fall into his arms a second time, I backed up a few more steps, my hand still held out in front of me, palm out.

“Please stay away. You’re just making it harder for me to continue working for you.”

That made him stop again, just inches from my hand.

“I don’t want you to go. I need…” he paused, his words hanging between us. My heart stuttered, waiting for him to say he needed me. Did I want to hear that?

“I need someone like you on my team. I would hate to see you go.”

That was not what I expected to hear. My heart rate dropped immediately, the desire that had turned my bones to liquid quickly drying up.

“Isn’t that what you wanted to hear?” he asked quietly, and my damaged pride had me nodding my head. It may have been what I thought I wanted to hear, but a fissure began to form on my newly exposed heart.

He closed the gap between us, my hands caught against the press of our bodies, and I clutched at his jacket, my knuckles pressing into the hard wall of his chest. This time his mouth possessed mine with irrefutable ownership, and I kissed him back feverishly, the rush of desire flooding my veins a second time.

How did he know that I wanted him to kiss me again before I even knew it? How could his mouth, his lips, his tongue, elicit the response from me that no other man had been able to get? I wanted to pour myself into him, feel him drive into me in an act of possession that a kiss could never duplicate.

He broke away from me slowly, leaving lingering fires on my cheeks, my eyes, my forehead, everywhere his lips caressed. He pressed his forehead to mine, his eyes closed, breathing deeply.

“Your heart is pounding so hard.” He murmured.

With a jolt I pushed away from him. I stared at him, wanting to place my hands on his chest again, to see if I was mistaken, but I stopped myself.

“What? What is it?” he looked puzzled, and not a little frustrated. My mind was a complete blank, and I couldn’t process what had just happened.

“Gareth, I…I have to go.” I stammered. He came toward me again, and I moved as quickly as I could around him, almost dodging out of the way as he reached for me.

“Please, let me go. I have to think about this.” I pleaded as I backed away from him, my mind completely consumed with getting out of his office.

I turned my back on him, not even waiting for him to say anything, and yanked open the office door. Here I was again, in front of the elevator, praying harder than I had prayed in a long time for that door to open.

I could feel his eyes on me, and as soon as I was in the elevator, I turned to look at him. I dropped my eyes briefly to his chest then met his gaze again. What I saw there was a mixture of shock and resignation. Then he was gone, back into the office.

As soon as the doors slid closed, I closed my eyes. What I had discovered was not possible; what had made me run out of there could not exist in the realm of science. It was a staggering impossibility.

What I noticed as I was clutching his jacket, my hands pressed so hard against his chest, was the absence of internal movement. He had commented on how hard my heart was beating, which was ironic.

Because his heart hadn’t been beating at all.