The hearings on fixed prices for new releases are a direct result of lobbying efforts by the One Price for Books campaign, launched on August 22 of last year. Organized by a roundtable of major book industry players and backed by several high-profile writers and artists…. For the past 15 years, the industry has been requesting that lawmakers fix book prices.

The excuses given are the usual claptrap:

To see why, examine this graph, which I’ve borrowed off the blog from Kevin McLaughlin (where it appeared in a different context): 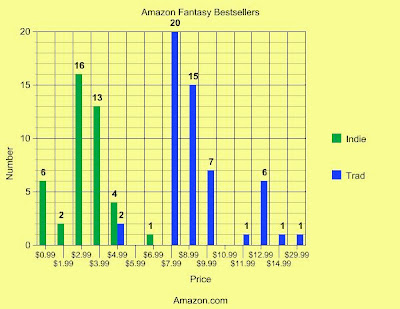 Indie authors, it is well known, flourish by offering their books at low prices. Some indies mistakenly think that this is exploitation of indie authors. Wrong. Indie authors are unknown to readers. Low (or free) prices can tempt a reader to take a chance on unknown authors, or on books that might have more grammar errors or less than professional covers. For a new author, Big Publishers can buy coop and advertising and send out hundreds of galleys well ahead of publication, they can pay for speaking tours and fancy gimmicks, all of which makes the readers feel familiar and comfortable with buying the book. Indies can’t do any of these things, generally. They have one card to play, and that’s price.

The indies use price to even the playing field and lure readers into taking a chance. After the readers have been wooed, then everything changes. My latest release, STRAT, hit the Top Twenty in two genre charts after I released it, despite having no reviews on any bookselling site yet, because by now I’ve built up a modest readership who were interested in buying it. But I gained most of those readers by offering the first book of my Unfinished Song series for free. And even now, I’ve kept the price of STRAT low, to encourage readers who don’t know me to try it out.

Laws such as those proposed in Quebec are slyly but precisely aimed to knock players like me out of the arena. Take a look at the proposed law: all books would HAVE to have the same price in the first nine months after release. How many of those books in the green columns on the above chart would be there if the Big Publishers and their purchased politicians had their way? They are betting–not as many. That’s exactly what they are lobbying for.

It’s estimated that by 2016, 50% of the US book market will be digital. Europe and Asia are far behind. Why? In part because of collusion between Big Publisher and governments, of the kind being attempted in Quebec. In some European countries the taxes on ebooks are astronomical compared to the taxes on print books, leading to the absurd situation that it’s more expensive to purchase 0’s and 1’s than dead trees. As always, protectionism and monopoly leads to the strangulation of innovation, competition and new technology.

The people who gain are the big corporations, the 1% of authors who are already established, and the rich who can afford any price for books. The people who suffer are the little guys, the young, new and unknown authors, and the poor, who can’t afford to move into digital ereaders, which would vastly open up their reading vistas.

Finally, the other kind of diversity squashed by price fixing is the diversity of art itself. Niche markets cannot operate on economies of scale like big, popular genres. The rise of ebooks has not only allowed more authors than ever to make a living from their creative work, but it has expanded and deepened the diversity of topics, genres, and sub-genres that authors are free to explore.

When innovation is crushed by corporate and political collusion, literature as a whole suffers.

This is a great and insightful (as well as inciteful) article. Thanks for bringing it to our attention.