“Dad, I don’t care about money”

When I was about twelve, I remember having a conversation with my Dad about What I Was Going To Do With My Life.

After he stopped laughing, he said, “Okay, now be serious. What are you going to do with your life?”

He explained that only the most skilled of writers could actually make a living at it, and since I couldn’t even spell (still true), obviously, that did not include me. So, if I wanted to make any money, I needed to be “realistic” and pick a more lucrative career. I then retorted, alone with every aspiring artist everywhere and everywhen,

“Dad, I don’t care about money. I just want to be happy!”

A lot has changed since then. Dad has come around to my point of view. He decided that after a life-time of towing the line, he only wanted to be happy, so he changed gender and is now a woman, and also finally published his secret fantasy novel.

But meanwhile, now a parent myself, I’ve come around to my Dad’s point of view, that, really, all things being equal, making money turns out to be fairly crucial to that whole Feeding The Hungry Brood part of life. I don’t like telling kids that I have to cancel swimming lessons because I didn’t sell enough books this month. Not that I’m willing to give up on being a novelist. I just wish I’d had more advice about how to balance art and business along the way.

It’s been my experience that those who are pro-business scorn art, and those who are pro-art, scorn business. There are even few other authors, already successful, who are willing to explain in a calm and sensible manner that yes, you can make a living as a writer.

In fact, a lot artists, writers, poets, painters and such not only oppose making any money personally, the oppose the idea of anyone at all making money, they oppose the whole capitalist system.

I came across an interesting article by Robert Nozick seeking to explain why intellectuals oppose capitalism. In a nutshell, verbally smart kids do well in school, and expect to do well after they graduate…but often don’t. Even if they land a lucrative career in academia, they don’t become billionaires like entrepreneurs  with good coding skills. Then they get resentful.

That’s an interesting theory. I think it’s missing a few bits, however.

For instance, I didn’t exactly do well in school. In elementary school, I’d miss 18 out of 20 spelling words on the test and get an Unhappy Face on my report card. (My elementary school didn’t use Letter Grades because that might make us feel bad….uh, how do you think a seven year old thinks about a giant Unhappy Face and being made to stay in recess?) I took Algebra three times and never did get higher than a D. In college, I nearly flunked a course when I blew off finals to write a novel. I was possessed by my muse…what was I supposed to do? Wait to write it, and miss my moment of inspiration, which I well knew would never come again?! Pah!

I think that we humans have two standards to dealing with others. One is for dealing with family and close friends. A friend in need is a friend indeed. A fair weather friend is no friend at all. True love is in sickness and in health, for better or worse. You commit whole-heartedly to those you love. You love them whether they are poor or rich, sick or healthy, reviled or respected…. if you don’t, it’s not real love.

The second way is for dealing with total strangers. That’s where money comes in. If you are a decent person, you deal fairly with strangers, giving them value for their money, being honest in your transactions, and relying on mutual self-interest to ensure the other party will do the same. If someone cheats you, you never deal with that person again, and warn others against him as well.

Both systems of morality are important, but they are completely different. Imagine if you had the attitude that if your child lied to you, you wouldn’t ever do business with them again.

Anyone who has had a newborn in the house knows that if you didn’t love your children irrationally, you would behave like a lizard parent, just to get a full night’s sleep, and eat them in the first week.

My theory is that our artistic creations, art and novels and such, are the children of our mind. We must love them even if no one else can. Because if we didn’t love our art just as irrationally as we love our children, we wouldn’t keep at it for the 10,000 hours we need to produce works that outsiders are finally capable of recognizing as worthwhile.

The first picture you drew, the first story you wrote, the first work of art you tried to produce, no matter what the medium, was, I guarantee you, crap. Except, of course, to your parents, who stuck in on the refrigerator with an Alphabet magnet. If you were lucky, no one tried to inform you of the market value of those pieces until you were at least into puberty.

Because of that, we disdain and scorn making art for money. It seems…uncouth. Not real art. It would be like parents who said, “We’re going to have a kid to raise some cash.” Wtf…? They should be arrested! An artist or writer who says, “I’m only going to work on that project if it makes a lot of money” is the epitome of slime. (Never mind that there are plenty of them.) And the strange thing is, those who love their art actually achieve greatness more often than those who are trying to turn it into a cash-cow right from the start. So our scorn feels justified.

But once we have put in our 10,000 hours , and the work we produce no longer looks like scribbles, I’d say it’s time to put aside that scorn.

Not while we are in the throes of creation itself. That’s a process like childbirth, and really, the only thing to focus on at that point is to push that product our. (Ok, that’s a very maternal metaphor, so for you dads; hold onto your muse’s hand while she’s in labor, even if she almost breaks your arm.) (I’m not sure that metaphor was better… moving on….)

But at some point, we can put on our business hats without betraying our art. And we can be appreciative that we live in a free market society where we can sell our art on an open market, as opposed to ninety-five percent of history, where we would have had to sleep with our patron and/or praise tyrants you loathe to publish anything.

Art and business do not have to be enemies. They can be allies.

Anyway, that’s what you can tell Dad next time he asks you What Are You Are Going To Do With Your Life. 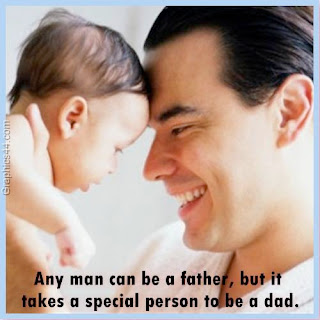 It takes a father a long time to learn to be as smart as his daughter.