GOLEM from GOLEM on Vimeo.

This movie is based on the short story “GOLEM XIV” of “Imaginary Magnitude” by awesome Polish science fiction author Stanislaw Lem from 1973. Many of Stanislaw Lem’s stories concerned the futility of war. In this story, an intelligent military robot intelligence comes to question its purpose and the logic of war. 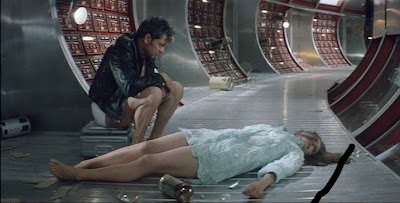 Stanislaw Lem is one of the less well known of the greatest twentieth century sf authors. It’s taken awhile for all his works to be translated.His stories are often strange and wonderful, and he touches on all the deep themes and questions of the field with a subtlety and depth often lacking in lesser works. The stories are very much idea driven, with characterization and adventure taking second place behind the sheer grandeur of the vast universe.

Lem’s most famous story was Solaris, which has been made into a movie twice, once behind the Iron Curtain and once by Hollywood. My favorite book/collection of his is the Cyberiad, a sort of robot Decameron. In that collection too, you’ll find a story of two armies who are sent to war but achieve telepathy, which allows them to unify minds with the other side. At that point, they realize there’s no point to fighting and end the war mutually.

That all seems painfully utopian…until you consider how the Cold War ended.