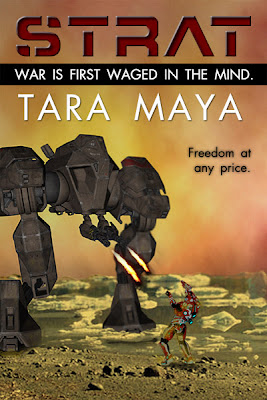 STRAT is a military science fiction novel that I’ve had on the back burner for a while. I confess: It’s a bit of an odd fish. The hero lives through five wars, which form almost complete stories in and of themselves. For a while, I thought it might work better as individual novellas. Eventually, however, I realized that even though the stories almost stand alone, they add up to a whole greater than its parts. The theme of the novel emerges from the gestalt.

I wrote the draft of STRAT while I was living overseas in a war zone, albeit as a peace-keeper, not a soldier. At the time, I was reading a ton of military science fiction–classics like Asimov, Heinlein, Haldeman, Card, Dickson, Drake, Weber, Turtledove and a host of others, whatever I could scrounge from other ex-pats and second-hand English-language bookstores. I was living in an area of the world formally colonized by a European power, which was now dealing with an rebellion of those who in turn wanted their own independence. The book started out a simple homage to the military science fiction genre, mostly for the fun of it, and, probably because of where I was and the conflict around me,   included a meditation on the legacies of colonialism and the strange twists and paradoxes of history. Which are never quite as we expect…

It was, ahem, a while ago. It’s strange to revisit the story now. I was tempted to revise it heavily–originally, I had planned on TEN wars–yes, I know, *eyeroll at self*–and restrained myself. I wouldn’t do it justice; it would become a whole new story. Of course, I started the Unfinished Song a while ago too, but I’ve worked on it continuously since then. And, as a result, I have ended up changing large swaths of the Unfinished Song, which is why it’s not as complete as I first, too rashly, promised.

I didn’t think it would be a great idea to become embroiled in a huge new project while I am still in the middle of the Unfinished Song, but it bothered me to see STRAT sitting there on my hard-drive, lonely and neglected.

Therefore, I finally decided to publish STRAT, letting it stand as I wrote it. I won’t second guess my earlier self, even if there are many things I would do differently today. I couldn’t anyway. I did a huge amount of research into the hard science regarding the planetary environments and mirror matter tech used in the story, and it’s no longer fresh in my mind. If it turns out to have rabid fans, despite itself, I might do the other five wars in a sequel. After I finish the Unfinished Song.

STRAT is complete and in the editing stages. If you’re curious and want to either Beta Read it, or Review it in exchange for a free copy, contact me or my assistant Katie at my publisher, Misque Press. (katie@misquepress.com) Be aware that it’s quite different from Dindi, and it’s not Young Adult. (Includes strong language.)

I’ll be post blurbs and excerpts from the book on this blog, so keep an eye out….