Blood To Be Released on Valentine’s Day 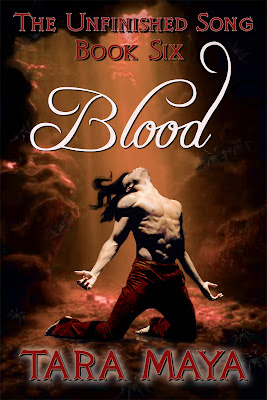 Dindi and Umbral have an uneasy truce, forced to work together to defeat a greater enemy: the Bone Whistler. The Bone Whistler’s scheme to sacrifice humanity and resurrect the Aelfae will culminate during an eclipse on the spring equinox…in three days.
Their fragile alliance may not withstand the terrors they face. Dindi hides as a clown, but even disguised, her dancing draws the eye of the Bone Whistler himself. She will have to defy him alone, for Umbral has  his own troubles.
Finnadro, who has hunted Umbral for a year, finally catches up with him… determined to punish Umbral for all his black deeds.
Life and death, spring and autumn, human and faery, are all reeling out of balance, and these three days will determine the fate of all Faearth.
Take a peek inside with this excerpt:
Umbral
Aelfae!
Umbral’s nerves hissed danger.  At the same time, so much power, so close, tempted him almost impossibly. Fighting the urge to rush forward, start drinking in all that power, was like trying to brace himself against an avalanche. He had to pull away and physically anchor himself on a stalagmite—literally wrap his hands around the cone of rock—to stop himself from revealing himself as Deathsworn by trying to steal the Aelfae’s light.
A groan rose deep in his chest and he muffled it against the rock. He let himself siphon just a little of the Aelfae’s power, just a trickle, just enough to dull his hunger and allow him to suppress his need for more. Even that tiny amount felt like a huge cascade of power. The Obsidian Mask felt heavier than it usually did, but his Penumbra throbbed with strength, and he bore the extra weight easily.
Would the Obsidian Mask deceive the Aelfae? If it did not and he showed himself to them, they would fall upon him and slay him where he stood. He didn’t delude himself that he could defeat six Aelfae warriors at the height of their power, flush with new life from their resurrection.
Waiting for them to discover him was no better. He must know if he would need to flight or flee or if he could trick them. Only when he was sure he could control himself did he look again at the Aelfae. He stepped out from behind the stalagmite.
Dindi glowed just like one of them. Seemed to merge with them almost.
What had he expected? She was one of them—as close to Aelfae as still lived in Faearth.
What if she allied herself with them against him? What would it avail him for the Obsidian Mask to deceive the Aelfae if Dindi denounced him?
No one had noticed him. If he fled the cave now, though they would surely chase him, he might still have a chance of escaping. He would warn Obsidian Mountain. They would have time to prepare for this new threat. But in the meantime, the Aelfae would meet up with their old comrade, the Bone Whistler, and their power would only grow. Umbral had no idea how the Bone Whistler planned to destroy humanity or how close he was to achieving his goal.
Dindi fell to the floor, gasping. She wasn’t melding with the Aelfae at all. They were smothering her.
Umbral stepped forward, prepared to fight all six immortals, if he had to. If those fae muckers planned to hurt Dindi, they’d have to go through him first.

There are many ways you can participate!

The blog tour will officially run February 14 – March 14 and of course all tour visits will be linked to on my blog, Facebook and Twitter. To sign up, please email my assistant at katie@misquepress.com.

I totally squeed (squee-ed? squeen?) when I got the email!