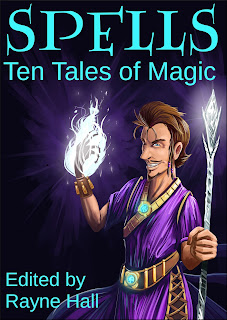 You can create exciting plot complications if the magician who casts a spell gets it wrong.

Here are some ideas you can use in your fiction. Although I’ve used the female pronoun, everything applies to magicians of either gender.

* The magician summons a spirit (e.g. a demon) to do her bidding – but that spirit is malevolent and more powerful than she expected, and she is unable to keep it under control.

* The magician creates a protective circle around herself which shields her from the summoned spirits and from evil – but then she accidentally steps out of the circle.

* The magician recites a complicated spell … but she misremembers a word or mispronounces a syllable, and the outcome is not what she intended. (This happens only with forms of magic which rely on the precise wording, for example, ancient Egyptian magic. It doesn’t happen with forms of magic where the intent is more important than the word, such as Wiccan witchcraft.)

* The magician wants something intensely, and doesn’t mean to cast a spell … but she has unwittingly raised magical energy by dancing or drumming, and her intense desire turns into a spell… one which she comes to regret bitterly.

* The magician, roused to righteous anger, casts a harmful spell (a hex or a curse) on someone… but the harm returns to her, and she suffers the same fate. (In some forms of magic, it is said that the harm returns threefold, or hundredfold.)

* The magician casts a benevolent spell to help someone… but by helping one person, she is harming another (e.g. by helping a friend succeed at a job interview, she robs someone else of the chance), and the harm returns to her.

* The magician casts a spell on the spur of the moment, which at the time seems the right thing to do… but afterwards, she realises that what she has done is unethical, or has unwanted consequences.

* The magician summons a god into the circle …. but gods don’t take kindly to humans who boss them about. Although they may lend a helping hand to the magician who invites them, they may punish the presumptuous ones.

* The magician raises magical energy to fuel a spell (for example, by dancing, drumming or chanting)… but she raises more than she intended, and the spell magnifies out of proportion. She may intend to light a candle, and instead set the house on fire. She may intend to bring an afternoon’s sunshine, and instead bring ten years of desperate drought.

* The magician may desperately try to concentrate on the spell, because magic works through the mind… but in a situation of acute danger, she can’t concentrate. The more urgently she needs to concentrate, the less she is able to. Perhaps the gun-armed killers are already breaking down the door, or the sadistic villain is torturing her lover in the same room, and the distraction means she can’t summon the concentration she needs to work magic.

* The magician casts a spell for what she wants to happen… but she forgets to specify how. For example, if she’s desperate for cash, she may cast a spell for a hundred thousand dollars, and a week later she learns that her beloved sister has died and in her will left her that amount.

* The magician casts a spell for what she wants to happen… but she forgets to specify when. The results come years later, when she has long forgotten about the spell, and when the results are no longer desirable.

Magical mistakes can seldom be undone. Trying to undo a spell may even mess things up further. A sensible, experienced magician will always think carefully before she works magic, considering the necessary preparations, the ethic implications, and the possible consequences – but the magician in your novel may not always be careful and sensible.

The fiction potential of magical misjudgements and screw-ups endless. I hope this article has inspired your creativity.

If you have questions about magical mistakes, or want feedback for an idea, or if you need help with a magical mistake scenario in your work-in-progress, please ask. I’ll be around for a week and will answer questions.