Pigments of My Imagination by Angela Kulig 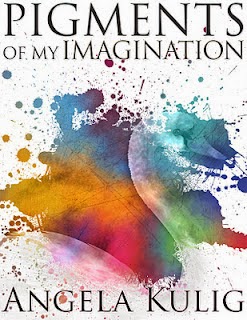 From the moment Lucia steps into Bayside Art Academy, she is fed a steady stream of lies, but it’s not until she meets William that she begins to question the people she trusts. Unraveling fact from fabrication seems impossible until Lucia finds her first painting, and discovers the dead do not lie–at least not to her.

A dozen lifetimes ago, Lucia started a war. Not a war with armies or guns, but a bloody war nonetheless. The path leading Lucia to the truth is hidden within lovely art that spans the ages. In this life, however, Lucia doesn’t know where to look. Lost, she turns to the one thing she knows with certainty–she is in love with Leo, and has been before

Download Pigments of My Imagination on Amazon, Barnes and Noble and Kobo. You can also purchase it in paperback.

It was hard for Lucia to see around the boy that stood before the easel, but she swore the birds on his canvas just moved. Large white birds, so detailed she was convinced moved. Large white birds, so detailed she was convinced if she stroked them they would be softer than in real life. From her position in the doorway, the feathers shone in the classroom lights as if they were in the summer sun. They were swans, she realized as she bent her neck to get a better look.This boy couldn’t be a student. He could have been younger than she was, but he painted with all the skill of a master. No ordinary kid could paint a pool of blue that could really ripple below flawless webbed feet.She might have stood there forever, her mind going numb from the sheer impossibility of it—eyes wide, watching the taut muscles of his back. He moved his arm quick and precise, making one stroke after another, his light brown curls falling to the base of his neck, shaking from the effort of his work. She needed him to turn around; she needed to see his face. She needed to know if he was real.He couldn’t be! And she mentally slapped herself. Two boys in ten minutes?

She opened her mouth to speak to him just as one of the swans gave a loud honk. Lucia watched as it pulled itself effortlessly into the starry sky of the painting and she gasped, throwing her hands up to her mouth.

At first, she was convinced she had caused the boy to ruin his beautiful painting. Only with odd control, and a loud sigh, he raised his arm and sliced a large midnight blue line across the whole of the canvas, stilling the birds with one stroke.

“It’s not nice to stare,” he said without turning around.

His voice sounded cold, but it was pleasant, and it hinted at how nice it would sound if he weren’t furious.

In Lucia’s mind a nice apology was forming, but those were not the words she wanted to say.

“How did you do that?” she asked, because how could she not?

The blue diagonal line that had ended the dance of the swans dripped from the weight of the thick paint. He did not answer.

“I thought,” he finally said. “That this was an advanced art school. Clearly, you should be familiar with how one paints.”

He was antagonizing her, and it made self-doubt creep up through the floor and back into her heart. Of course she knew how to paint, but as far as she was concerned, what he had been doing was impossible and she huffed. A burst of hot hair shot out from her wet lips, and the boy chuckled before turning around.
He stared at her, with his light blue eyes just like the reflective bits on the pond he had just painted, and for the briefest moment Lucia thought they had widened in surprise. There was something so familiar about this odd occurrence, just like there had been with the other boy. Had she dreamed this whole thing before?
“No,” Lucia breathed. “How did you make them move?”