The Shifter: Book One of The Healing Wars by Janice Hardy 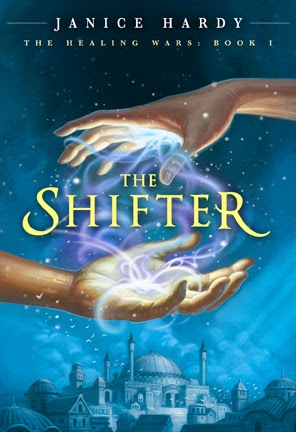 A dangerous secret. A deadly skill.

Nya is an orphan struggling for survival in a city crippled by war. She is also a Taker—with her touch, she can heal injuries, pulling pain from another person into her own body. But unlike her sister, Tali, and the other Takers who become Healers, Nya’s skill is flawed: she can’t push that pain into pynvium, the enchanted metal used to store it. All she can do is shift it into another person, a dangerous skill that she must keep hidden. If discovered, she could be used as a human weapon.

But one day Nya pushes her luck too far and exposes her secret to a pain merchant eager to use her shifting ability for his own sinister purposes. She refuses—until Tali and other League Healers start disappearing mysteriously. Now Nya must decide: How far will she go to get Tali back alive?

You can find The Shifter on Amazon, Barnes and Noble or IndieBound.

Danello lived in one of the better boardinghouses on Market-Dock Canal, in a neighborhood I could only dream of affording. His family had three rooms to themselves—two bedrooms attached to a small kitchen and dining area. Though a woman’s touch still showed, it had been a long time since it showed strong. Two dying plants—possibly coriander—sat on a shelf near the window, holding back faded and singed curtains bunched on one side. A rack of worn copper pots hung above a small stove, its skinny pipe chimney snaking up the side wall. They did have a view, though it was only a grassy corner of a market square. Two people were huddled under a bush, a ratty blanket tucked around them. I looked away.

“Did you find her?” a boy called, running out of the room on the left. “Oh, I guess you did.” His mouth wiggled as if he was unsure whether to be happy I was there or scared that I had come.

“This is—” Danello turned to me and laughed sheepishly. “I don’t even know your name.”

He nodded. “Nya, this is Jovan. The other two are with our da.”

Not knowing what else to do, I waved, and the smaller version of Danello waved back. Same rich brown eyes, same pale hair, same determined yet sad set to the chin.

“Da’s unconscious now,” Jovan said in the measured tone of someone trying very hard to sound grown-up. Saints, he was so young. Too young to carry pain that wasn’t his. “Do we need to wake him?”

My stomach twisted, but I shook my head. “Don’t wake him. I can do it while he’s asleep.”

We moved into the back bedroom, small but cozy. Paintings of flowers hung on the walls, some painted on wood, others on squares of cotton. By the bed, Jovan’s twin brother sat on a yellow stool, his unhappy face pale and tight. Their little sister sat on the floor at his feet. Her blond head rested on his

knee and her arms were wrapped around his shin. Neither looked up.

“That’s Bahari, and Halima there on the floor.”

I backed away. No bed was worth this. I wasn’t healing, I was deciding who suffered. Saints did that, not me. “I can’t do this.”

“Yes, you can. So can they.” Danello squeezed my hand, drew me forward. “What do we do?”

“Change your mind, find a pain merchant who’s buying, drag him here by his hair if you have to, just please don’t make me do this.”

He took both my hands, held them tight. They were warm, and for one irrational moment I felt safe. “What do we do?” he asked.

What we had to, even if we didn’t like it. Hadn’t I always wanted to be a Healer? It might not be what Tali did, but I could help them. The shift was only for a few days, until the pain merchants were buying again. It wasn’t as if I were permanently hurting them. I gulped down air and reluctantly pulled my hands away.

“Nothing yet,” I whispered. “I have to see how badly he’s hurt first.”

His da’s forearm bent the wrong way, so that was broken for sure. The thigh was bloody and gouged, but the leg was straight. I glanced at Jovan and my stomach rolled. Just think about their father . I went to the opposite side of the bed and placed my hand on his forehead. Cold, wet strands of the same pale hair as his children’s stuck to my fingers.

Tali’s voice echoed in my head. She’d been teaching me what they taught her, claiming it was in case the League ever let me in one day, but I wasn’t so sure of that. I figured it was just her way of making it up to me ’cause she got accepted and I couldn’t.

I took a deep breath. Feel your way through the body, to the injury. My hand tingled as I felt my way through blood and bone. Broken arm, as expected. Three broken ribs. Torn muscle on the leg, but not broken. Cuts and bruises all over, but he’d heal that on his own.

“It’s not as bad as you thought.” I explained his injuries as best I could without scaring the little ones. Bahari already looked ready to bolt.

“I’ll take the arm and leg,” Danello said as if ordering dinner. “They can each take a rib. That won’t be too bad, will it?”

Spoken like someone who’d never had a broken rib.

“It’ll hurt to breathe deep. Bending and stretching will be hard.” Three sets of brown eyes went wide. I almost smiled, but figured my grin would scare them more than the pain. “No roughhousing ’til the pain merchants are buying again.”

Bahari jumped up, his fists clenched at his sides. “I don’t want to do this.”

“I’ll”—Bahari looked around the room—“do something else to help. Go to the herb sellers.”

“Bahari!” Danello gasped. “Half the time they sell you poisons. I’m not risking Da’s life like that.”

I shuffled back against the wall. I wasn’t sure I wanted to do this either, and I didn’t want to shift anything to Bahari if he didn’t want it.

“Yes, but you can handle it for a few days.”

“Do it, Hari,” Jovan said in a voice too old for such a small boy. “Da’s never let us down, and we’re not letting him down now.”

Bahari didn’t agree, but he didn’t say no again either.

“Fine, then it’s settled. Me first.” Danello dragged over a chair from under the window and sat down, grabbing the arms tight.