The Art of Forgetting: Rider by Joanne Hall 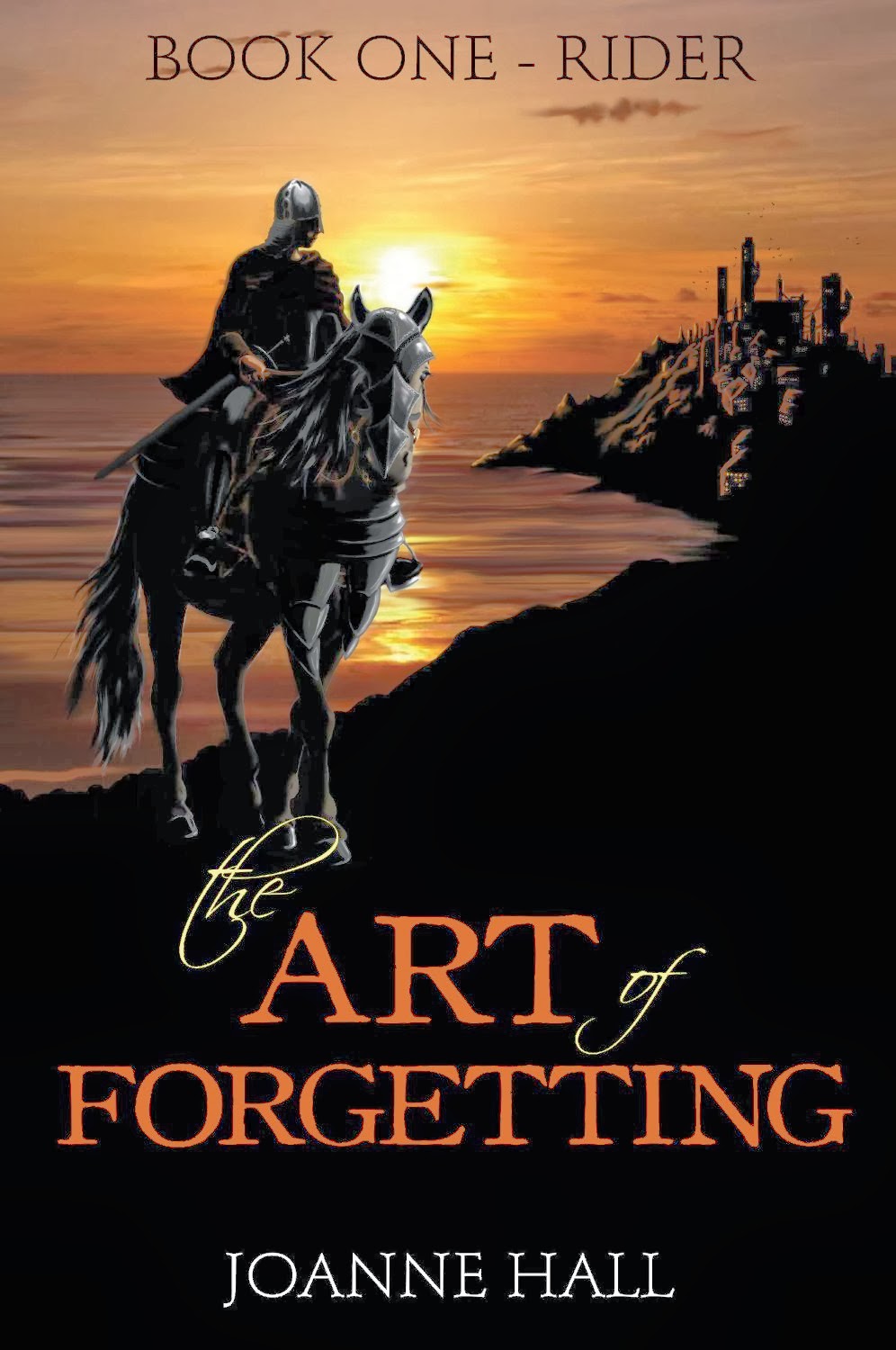 A young boy leaves his village to become a cavalryman with the famous King’s Third regiment; in doing so he discovers both his past and his destiny.

Gifted and cursed with a unique memory, the foundling son of a notorious traitor, Rhodri joins an elite cavalry unit stationed in the harbour town of Northpoint. His training reveals his talents and brings him friendship, love and loss, and sexual awakening; struggling with his memories of his father who once ruled there, he begins to discover a sense of belonging. That is, until a face from the past reveals a secret that will change not only Rhodri’s life but the fate of a nation. Then, on his first campaign, he is forced to face the extremes of war and his own nature.

This, the first part of The Art of Forgetting, is a gripping story about belonging and identity, set in a superbly imagined and complex world that is both harsh and beautiful.

The first gleam of dawn found Rhodri back on the river bank, while most of the town still slumbered. Mounds of stone, abandoned the previous night, were heaped near the edge of the water. He coerced the early-rising wherry pilots to deliver it to the top of the dam. The river was peaceful, sparkling silver in the morning light. It was hard to imagine it as the scene of yesterday’s violence, if not for the splashes of blood staining the stonework, and his own vivid memories.

By noon, the dam was almost complete, the water on the south side of the barricade considerably lower than that on the north. No sign of the demon. Rhodri hoped it had fled downstream in the night, but his reading suggested that once a territorial creature like that latched on to a place, it would die rather than leave it.

The river on the north side drained away into two deep channels that ended in hastily-dug ponds. They were keeping the water away from the houses, for now, but soon they would be swamped. The King’s Third needed to work fast. The water slowly drained away downstream of the dam, unveiling broad swathes of gravel and patches of dark, sticky mud. Fish thrashed in the dregs of the water as the cavalry gathered on the bank, weapons drawn. Rhodri squeezed the hilt of his sword, anxious to see what they faced. And still the water level dropped, with no sight of the demon. A ripple of impatience ran through the crowds of watching townsfolk. They had come to see blood spilt, and if the demon wouldn’t bleed for them, they would find another target.

The water dropped another inch. In the depths, something stirred, a ripple running crosswise to the current. The hilt was slippery in Rhodri’s hand, point drooping as he tried to hold it steady at Garrod’s command. He could cut and run; it would be easy, compared to facing what lay beneath the surface of the water. But his captain had ordered him to hold the line, and years of training, of drill morning and night, bell after bell, obeying Garrod’s every word of command, had changed him to his core. The discipline driven into his mind overpowered his body’s instinct to flee so strongly it was barely more than a fleeting thought, instantly overridden. Captain Garrod said hold the line. The line would be held, until death or fresh command released him. Beside him he could hear Nik’s heavy breath whistling through his teeth, hear the jingle of mail as his leg twitched in the stirrup, but he kept his eyes on the water, on that treacherous ripple that ran the wrong way.

The gravel of the riverbed crunched under Liberty’s hooves. The circle was slowly tightening. If the creature was to make a move, it had to be soon. The rippling had increased, the surface of the water agitated, broken up until Rhodri wasn’t sure what he was looking at. Sweat prickled his scalp, trapped under his helm. This was not like patrolling in Northpoint, where the enemy was visible, understandable. This was fighting magic, a beast that might not act in any logical way, that had unknown power. Nik whimpered softly at his side.

The surface of the pool exploded, an eruption of water white and freezing and blinding. Beyond it, through the mist, the spray, Rhodri heard a horse scream, a howl of pain, a voice yelling orders. Nik was yelling too, and Rhodri caught the cry and echoed it in his own throat, exultant, furious, released from the tension that had held him still. The line, moving as one, pounded forward down the sloping bank, blades levelled, cutting a swathe across the drying riverbed.

There was water everywhere. It was like riding through a nightmare storm, a waterfall, that churned the gravel to mud. It was in Rhodri’s eyes, his ears. He was deafened by the pounding on his helmet, blinded by the torrent. He had lost Nik, lost the Captain, had nothing but the feel of Liberty plunging forward between his knees, ears flat, teeth bared, and the cold, slippery leather of his sword hilt against his palm. In the rushing white ahead, it struck squealing softness, an inhuman sound, and the water rushing around him turned red. When he breathed in, he tasted copper.

“No!” He struck out again, fighting more than the beast, fighting his own evil memories that sought to trap him and drag him under. His blade stuck, ripped free. Something tore loose and was flung away, and the crimson rain deepened to black.

Which way was back? There was only the mud, the rain, the endless slashing against an enemy that seemed to be everywhere at once, hiding behind its shield of falling water. Liberty backed up, one step at a time. The torrent was thinning; Rhodri could see the blood-streaked faces of his companions, teeth set in morbid white grins, like the faces of skulls. There was grass beneath his hooves, and when he wiped his eyes, he could see the far bank of the river. The black water pattered down, lightly now, and in the sludge at the bottom of the stream a bloodied lump of flesh writhed as squealed, hissing through razor teeth, scrabbling in the last of the water as if it was a blanket it sought to hide under. Blood pulsed from a dozed slashes in its hide, and gobbets of pulsing flesh were scattered up and down the riverbank. Its body shimmered and bulged, as if its skin was too thin to contain the surging currents held within, and it was sucking the water around it back into its body, healing its own wounds, raising its savage head to snarl at the watchers on the bank. It was down, but it wouldn’t stay down for long.