The Dragon Empire by Heather McCorkle 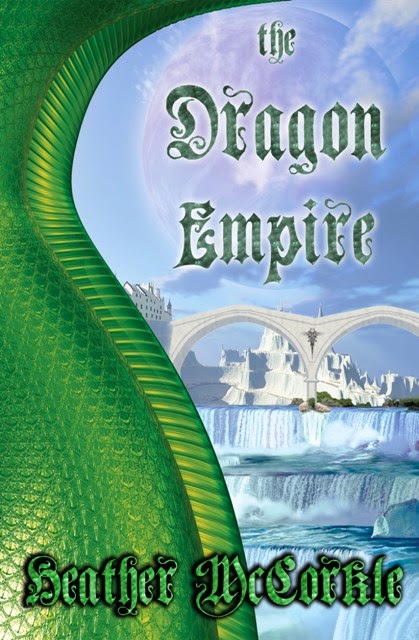 On Yacrana dragons are the advanced species. But advanced doesn’t always mean civilized…

There’s trouble in the Dragon Empire, the kind that could start a war between dragons and the races of people. Hidden factions of dragons believe they should rule the lesser races, not simply stand aside and allow them to develop as they will. Having lived so long in peace, the Emperors turn a blind eye, many oblivious that such attitudes even exist.

Despite being only an architect class, emerald dragon, Grendar is willing to risk banishment and death to stop that which his rulers refuse to see. The hope of peace lies not within the scaled breast of a dragon however, but within the hands of a group of people. But if the hidden factions have their way, these people won’t live to fulfill such a destiny. With a reluctant seer at his side, Grendar must leave his precious Empire for the outside world to save those that will one day save his kind.

Download The Dragon Empire on Amazon and Barnes and Noble.

What he was seeing could be the death of him, he knew, yet Grendar couldn’t look away. The undergrowth that had been hampering his progress through the jungle no longer seemed thick enough to conceal him. His hearts pounded and his throat constricted. What if they saw him? The human guise he was wearing wouldn’t exactly protect him, not considering what they were doing.

Through the ferns and palm fronds he could see them: four dragons the color of a starless night sky. At over twenty feet from hindquarters to nose, they were twice Grendar’s size. They gleamed in the tropical sun, their obsidian-colored scales contrasting with the bright blood on their long snouts and claws. On the beach before them was the source of all that blood. The partially eaten bodies of several people lay scattered about the sand like tortured and discarded dolls. The biggest dragon—one Grendar knew well—held a body beneath one of his massive forelegs. He reached down and tore a chunk of flesh from it, scarcely chewing before he swallowed. Both the sight and sound made Grendar flinch, the motion feeling foreign in a human body.

A breeze blew off the ocean, its salty essence tainted with the reek of carrion and death. Bile stung the back of Grendar’s tongue and nausea rolled through his stomach. People were protected, and for good reason. To kill one, let alone eat one, went against the creed of the Dragon Empire. Such a thing would get a dragon banished.

This morning it had seemed like an excellent idea to fly to the distant Breekay Islands and practice his human transformation spell. What with finals coming up at the end of the year and all. Now it seemed like the worst idea he’d had in a long time. He shivered in his borrowed skin and prayed that they wouldn’t smell him.

Not far beyond the black dragons, a ship lay crumbled against the jagged rocks that littered the bay. So the dragons hadn’t killed the people, they had found them. That didn’t make it much better. Their barbaric behavior was still unforgivable.

He started to shake, his nerves making it even harder than normal to concentrate and hold himself in a human body. Losing the form now, here, would make too much noise. Panic seized him and he jumped, hitting his head on a palm tree. Leaves rustled overhead, drawing the attention of the black dragons. Grendar ducked as low to the ground as he could get. He could turn invisible, but if he spoke the words to the spell aloud, they would know exactly where he was. Not to mention, he couldn’t do two spells at once. The transformation spell was hard enough to maintain.

“Quiet! I heard something,” the biggest of the four said.

Download The Dragon Empire on Amazon and Barnes and Noble.

Author of the paranormal Earth-conscious channeler series: Born of Fire (FREE novella), The Secret of Spruce Knoll, Channeler’s Choice, Rise of a Rector, the historical fantasy, To Ride A Puca, and the epic fantasy The Dragon Empire. Heather also has stories in the following anthologies: In His Eyes (FREE) and Winter Wonders. You can find her on her blog or website.

*** Today is the last day to register for the 30 Day Novel workshop that will give you all the tools and tips you need to write your novel faster and better than you believed possible — and have so much fun you’ll make monkeys in a barrel jealous. Sign up today. ***