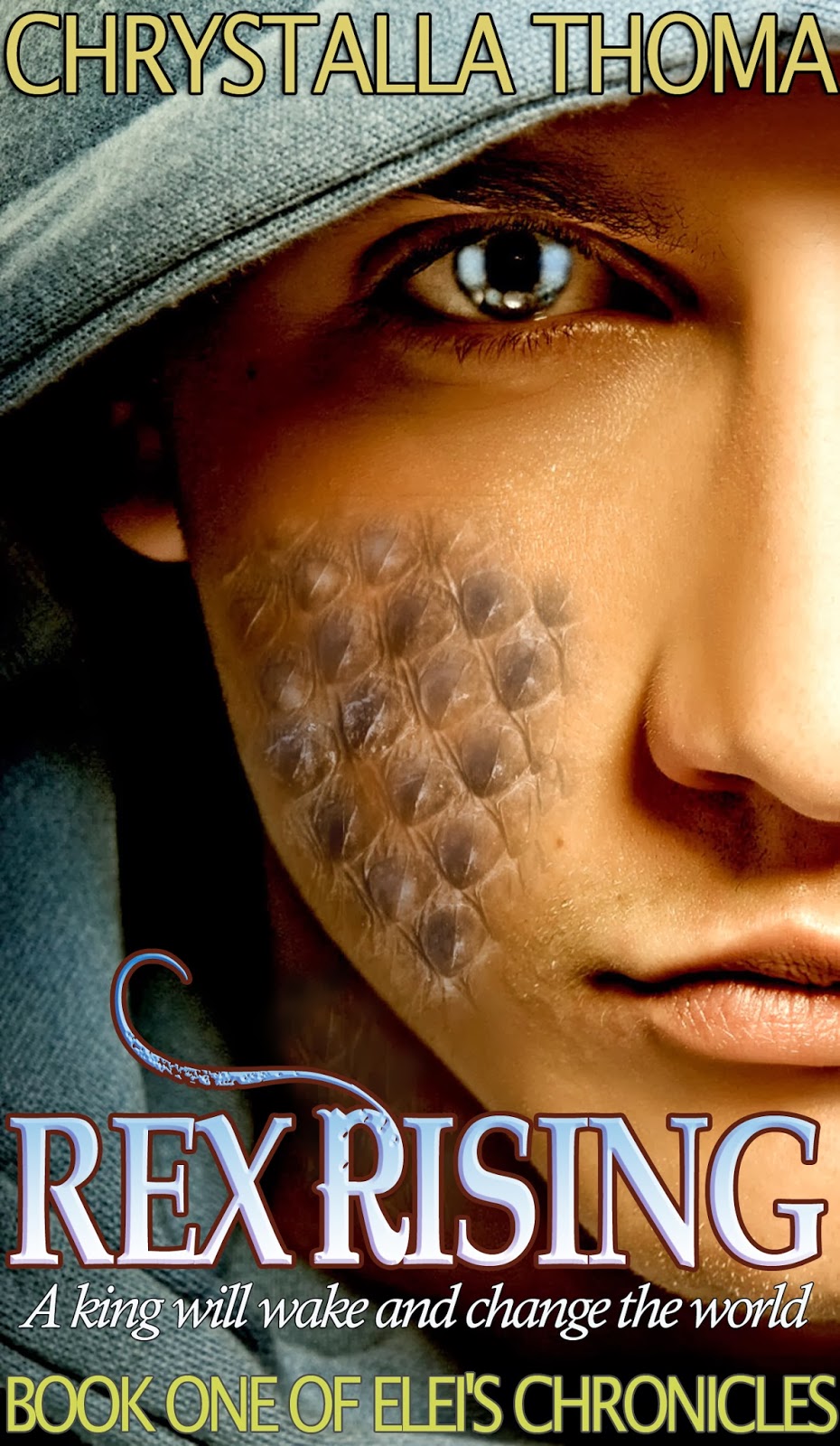 In a world where parasites create new human races, Elei leads a peaceful life – until a mysterious attack on his boss sends him fleeing with a bullet in his side. Pursued for a secret he does not possess and with the fleet at his heels, he has but one thought: to stay alive. His pursuers aren’t inclined to sit down and talk, although that’s not the end of Elei’s troubles. The two powerful parasites inhabiting his body, at a balance until now, choose this moment to bring him down, leaving Elei with no choice but to trust in people he hardly knows. It won’t be long before he realizes he must find out this deadly secret – a secret that might change the fate of his world and everything he has ever known – or die trying.

Winner of position #6 on the Preditors and Editors Readers Poll in the category of Fantasy and Science Fiction Novels published in 2011.

Warning: Some profanity and violence.

Rex Rising is the first novel in the Elei’s Chronicles series. You can download it for free at Amazon, Barnes and Noble, and iTunes. Find out more about the rest of the series here.

The small wound was above his left hipbone. He pressed down harder to staunch the bleeding and gritted his teeth. His pulse leaped under his palm as he sat shivering on a hard, cold bench. He rested his other hand on the grip of his holstered gun. In his blurry eyes, everything had a shimmering edge, suspended between reality and dream.
Then the world tilted.

Elei jerked and sharp pain erupted in his side. Hissing, he drew his gun and waited. His possessed eye throbbed; cronion, the strongest of his resident parasites, hated surprises. The world lit up in bright colors. Be ready. His heart pounded in his chest, sent bruising beats against his ribs. He swallowed past a dry throat and gripped his gun until his knuckles creaked.

Nothing moved. Oblong objects around him pulsed in cool hues of green and blue. Safe. Nothing living. He relaxed a little. For a while he simply sat, left hand pressing against the wound, the cold metal barrel of the gun held against his right thigh.

Clamping his jaw, Elei lifted the gun and turned to point in the general direction of the voice. Cold wind blew his jacket hood back, allowing him a wider view. The man appeared at the right periphery of Elei’s tainted vision — a splash of red. He went still when Elei cocked the hammer. The click rang too loud in the quiet.

“Calm down, will you,” the man said, raising his hands. “Just checking on you. You’re bleeding all over my boat.”

The boatman. Elei let out a breath and lowered the gun, but didn’t click the safety back on, just in case. The cold breeze ruffled his short hair and water splashed and murmured. The low hum of an engine set his teeth on edge. What was he doing in a boat out at sea? He prodded his memories, but came up blank.Cronion beat at the back of his eyeball like a hammer. He forced his tense muscles to relax and rubbed his eye with his thumb until the dull ache eased. This time, when he blinked, he saw the surface of things, his unfamiliar surroundings — the wet prow, moonlight glinting on metal benches like the one he sat on, yellow lifesavers underneath them. The boatman stood by the rail, dressed in shabby trousers and a pale yellow shirt, watching him from under his dark cap. The light from a lamp set on a bench pooled around him. The sky stretched naked above, night-black and starry.

The boat rocked and listed. His legs slid. He was falling.

He threw his hands to the sides, to find a handhold, the gun screeching against metal. His fingers caught the edge of the bench. He clutched it, the deep, sharp pain in his side squeezing the air from his lungs, and he bent over, panting.

Broken pieces of memories rushed back with a deafening roar. Shots fired. Running through the streets. The docks of Ost.

He was crossing the straits between the great islands.

Shivers crawled up his spine. He lifted his hand and stared at the blood on his fingers. He’d been shot, but couldn’t remember who’d done it.

Elei groaned to himself. He laid his gun — an antique, semi-automatic Rasmus — on his lap and wrapped his arms around himself, tucking his icy hands under his armpits; hoping fervently this was nothing but a dream, and knowing he just wasn’t that lucky.

“Hey.” The boatman approached him, stepping over the benches with his long, spindly legs. Red color flashed over his heart, pulsing with each beat.

Elei straightened with a wince and raised his gun. It seemed to have grown heavier; he could barely lift it. “What do you want now?”

“We’re almost there.” The boatman’s voice resonated with a hidden growl. When he raised the dakron lamp, its light revealed a leathery, deeply lined face and bright blue eyes. “Better get ready to jump, do you hear?”

“I heard you.” Elei kept the gun leveled, his arm muscles straining. Where in the hells are we? Cold sweat sluiced down his back. His nostrils flared and his body tensed with the urge to run. Run where? He was in a boat, for all the gods’ sakes, and yet he knew that even here, in the openness of the sea, he couldn’t afford to let down his guard.

Holstering the gun, he struggled to rise but his damn legs cramped and resisted. Shivers danced down his spine and adrenaline made his blood pump faster, so it trickled down his side, scalding his chilled flesh.

“Hurry up, boy,” muttered the boatman and his hand closed around Elei’s arm like a band of steel. “We can’t linger here.” He hauled him up as if he weighed nothing, the movement sending sharp claws of pain deep into Elei’s side.

Hells. Elei gritted his teeth and refused to make any sound as the boatman dragged him to the rail and left him there, the boat rocking with the movement. Muttering, the man went back to his steering wheel and navigated the boat through the dark waters.

In the distance, squat buildings, old warehouses, rose from the white mist of night. Starlight reflected off polished gray walls. The vacant pier jutted out into the sea like an arm of stone. The boat swerved toward it, then slowed down and bumped to a stop, thumping gently against the square blocks.

Elei inhaled the humid air and tried to get his bearings, to remember something, anything. In the end, he had to admit defeat. “Which island is this? Is it Kukno?”

“Are you saying I tricked you?” The boatman’s voice was dry. “We’re right where you told me to take you. Dakru.”

Read the rest for free from Amazon, Barnes and Noble, and iTunes.
Find more from Chrystalla on her blog, newsletter, Facebook and Twitter.