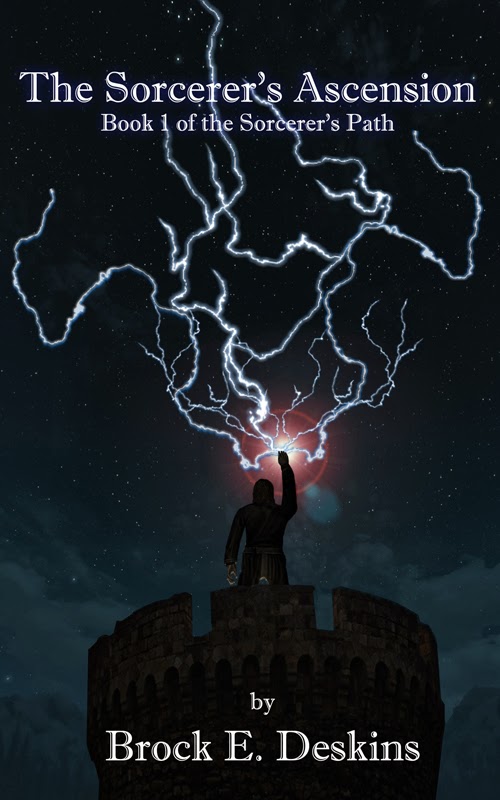 A bastard king loved by his people but despised by the aristocracy struggles to hold his kingdom together even as a rival plots to steal his throne. King Jarvin Ollander seeks anyone who will aid him and finds it in the most unusual of allies.

His family caught in the web of political intrigues, his father made a scapegoat for the machinations of greedy men, Azerick Giles finds himself torn from a life of wealth and privilege and cast out onto the streets of Southport. Just on the cusp of manhood, Azerick struggles to survive by any means, often just barely able to do so. Driven by his anger and desire to seek vengeance upon those who took everything from him, Azerick discovers a power deep inside him that could be the tool he needs get what he wants…if it does not destroy him first.
The Sorcerer’s Ascension is currently $.99 on Amazon and available for borrowing if you have Amazon Prime. All other titles in the series are available on Amazon, Smashwords, and Barnes and Noble.

When his stomach rumbled powerfully once again, he decided that he was going to just have to do a snatch and run, hoping the proprietor would not see him or care enough to raise too much of a fuss. His luck was off today, he could feel it. The way things were going, the crowd would resume their normal pressing mass the moment he struck and a watchman or the baker would grab and beat him.

Azerick sidled up to the table, ready to grab a large, round loaf of black bread when the baker looked right at him. “What are you doing here? Why did you have to pick my booth? Go on, take the bread and be gone with you. Nobody’s going to want to come to my stand now, defiler.”

The street rat looked at the baker in confusion then glanced over his shoulder as the crowd moved away, watching him warily and muttering.

“Do not let his shadow be cast upon you or you will die”.

“All die who get near him. We may all die now.”

“What are you people talking about?” Azerick demanded.

“Cursed! He is cursed to lose everyone he befriends.”

“I am not cursed! What are you talking about?”

“His family is all dead. Friends all dead. He is cursed, cursed by the hand of Sharrellan.”

“He is the hand of Sharrellan, delivering her touch of death to all who comes near.”

“I am not cursed! I am not the hand of death!” he shouted, but the crowd drew away from him and continued their droning.

Azerick grabbed the loaf of bread from the table, casting a glare at the baker and everyone around him. He half expected the baker to change his mind and demand that Azerick pay for the bread, but his face had gone purple, black splotches stood out against the plum-colored flesh, and his tongue protruded, swollen and blackened like a plague victim.

The street rat threw down the loaf and ran. The street-clogging populace parted like the water at the bow of a swift-moving ship to let him pass.

“Beware death’s shadow, beware the hand of Sharrellan,” the people’s mantra continued as it followed him, chasing him away like a swarm of relentless bees trying to drive him from their hive, the chanting sounding like mimicry of the bees’ angry buzzing.

Azerick found himself near the docks and burst into Peg’s shop, not knowing where else to go. “Peg, what is going on around here?” Azerick asked as he approached the long counter where the old sailor sat minding his store and watching for customers.

“Now why did ya have to come back here, lad?” Peg asked as his face purpled and black splotches began spreading across his visage. “Hasn’t old Peg treated ya right since he met ya? Ain’t he done nothin’ but help ya?”

“Then why’d ya come back and kill me? Look at me, boy. Already your foul curse is on me. Ya killed me, boy. Ya killed me sure as sure. Go on now and let me die in peace.”

Azerick ran from the store, sprinted down the harbor front past the long piers and moored ships until he saw a ship with someone he recognized shuffling about on the deck.

“Bran!” Azerick called out as he ran the length of the long dock. “Bran, you have not left yet. I don’t know what is going on. Everyone is acting strange and dying. I think the plague has come to Southport. We need to get out of here.”

His friend turned toward him, his face already showing the signs of death. “It’s no plague, Az. It’s you, you are the plague. I was too slow. Everyone on the ship is dead already. I suppose it doesn’t matter now anyway. Andrea is long dead, killed by your curse when she met you, just like the rest of us.”

“Yes it is. Do you know why she was out the night the slavers took her?”

“Her father put his hands on her again. He did that sometimes when he was really drunk. Just his hands. They fought and she ran off even though she knew it was dangerous.”

“You could have kept her safe, Az. You knew what it was like for her, but you kept your nice, safe little haven all to yourself. You were safe from the depredations of the city above. You let her die. Your selfishness let her die,” Bran accused him.

“It is not my fault!” Azerick vehemently denied. “I could not keep her safe! I could never keep those around me safe! They all died: mother, father, Jon and the others, they all died.”

“Now you begin to see,” Bran told him. “Everyone around you dies. Your family died because you are cursed, and Andrea died because you were a coward, because you were too much of a coward to try to keep her safe. Better to let others take her. That way you would not feel the weight of responsibility. Your conscience could be clear. She would be dead, but you could deny culpability. But you know the truth. You know it was your fault.”

Azerick barely heard Bran’s last words. His own thoughts were echoing inside his head too loud for him to focus upon his friend. I could not keep her safe! I could never keep those around me safe! They all died: mother, father, Jon and the others, they all died.

“They all died because I did not keep them safe. I may not have been able to save father, but I should have been there for mother, Jon and the others, and Andrea,” he said, talking to himself as he left Bran on the ship.

Azerick awoke in a cold sweat, somehow knowing it was not the nightmare that woke him. Someone was coming. He heard someone open the trapdoor hidden beneath the burned out timbers of the tanner’s shop followed by a sudden cry and thump of a body hitting the stone. He sprang out of bed, grabbed his knife, and prepared to defend his home. If the gods cursed him, then his enemies would suffer under the spell of his shadow as well. He would make certain of that.