The Obsidian Dagger by Brad A. LaMar 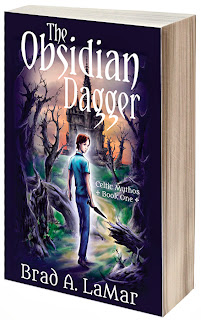 When a mad witch with a magically crafted and frightfully powerful Obsidian Dagger threatens to obliterate humanity and overtake the magic clans of the Celtic Isles, destiny forces 17-year-old American, Brendan O’Neal, and his younger sister, Lizzie, to intervene. Joining the desperate princess of the Leprechauns, Dorian, and her two loyal companions, Rory and Biddy, they embark on a dangerous and wondrous adventure across Ireland and Scotland to thwart the witch and save mankind. Brendan will soon learn that the lines between reality, mythology, and divinity are more blurred than he ever imagined.

Brendan’s mind ran through all of the worst possible outcomes as they walked along the path in the Black Forest. The Black River and the bridge was behind them now and dark shadows and ominous, unforeseen dangers awaited them. The thought of the unknown was hard on Brendan. What would happen to Dorian, Rory, or Biddy if this strange illness-if it could be called that-overtook them? Would they end up like the Sidhes or the Merrows? Would it be worse than being controlled by Morna? Would they die?

After mulling around those disturbing thoughts for a while, Brendan started to focus on what would happen to him and to Lizzie. Without the help of the others how did they hope to complete the task? Gorogoch had already told them about the human slaves Morna had, and that was not a fate that Brendan wanted. A zombie-like monster at the will of a crazy old witch…no thanks. The locals called them Ruas for their glowing red eyes, a trademark of the poor devils. Not a fate that anyone would want to suffer.

They walked along in silence, listening intently to their surroundings. Any noise that was out of place-albeit in a cursed forest-drew their attention and made them ready their guard.

Brendan was getting tired of the on-edge feeling so he decided to probe Gorgoch‘s memory. “Are we there yet?”

“Not quite,” the ghost replied. “More obstacles await us.”

“Great. Like what?” inquired Lizzie. She had calmed herself considerably after the fight with the Kelpies, but the anticipation of the next foe was making her antsy.

Gorgoch tried to think back to when he was alive and stormed the gates as a vengeful youth. Losing his love had driven him to the edge of murder, only it wasn’t Dullahan or Morna that received his wrath, but the unsuspecting people that Morna had unleashed him upon. It was hard to remember anything but the hate he felt at the time. It was blind rage he supposed.

“What do you mean?” asked Dorian.

“I came through here so fast and was fueled by so much hate that I’m having a hard time remembering anything other than that.” Gorgoch moved along in thought and a few memories floated to the surface of his consciousness.

“After the bridge there was…” he fought hard to pull the memory up. “Darkness.”

Three more steps showed Brendan, Lizzie, Rory, and Dorian what Gorgoch had meant. The path had led them directly over a hole in the ground that was covered in overgrowth. Gravity won out and they plummeted into the unknown darkness with a scream.

Biddy flapped her wings and looked over at Gorgoch with great surprise. He shrugged. “Oh yeah, a cave.”

Biddy and Gorgoch floated down the entrance of the cave in time to see the rest of the group untangling themselves from one another. Lucky for Rory, he was laid out flat on top of the pile.

“Crickey!” the little man cried. “A little warning would have been nice there.”

“Sorry about that,” replied Gorgoch with a shimmering smile. “I forgot what the darkness was.” Gorgoch made his visceral self-glow a bit brighter and shed a modicum of light in the small room.

Brendan got to his feet first and offered his hands to Lizzie and Dorian. He pulled them up and they all glanced around the cavern.

“Wow, its cozy in here,” Brendan joked as he felt the dampness on his backside and tried in vain to wipe it off. He held his sword aloft and pointed it back up the entrance. The sword illuminated the smooth, steeply-pitched slide that they just tobogganed down. “Good thing it wasn’t just a straight fall.”

“That’s for sure,” agreed Biddy. “It was probably fifteen meters or so.”

“That would have left a mark,” chuckled Rory. Half way through his laugh a fit of coughs set in and made him struggle to breathe.

Brendan looked around the small cavern and took note of the few cave characteristics that he learned about in Earth Science. There were small stalagmites and stalactites that littered the ceiling and the floor. The walls glistened with small flecks of crystals that formed as water ran down carving out the cave over thousands of years. The cave opened up to a thin passage that was a dozen meters opposite the entrance. The floor’s gradient sloped in a subtle manner.

“Well, Gorgoch, do we go to the passage or back topside?”

Gorgoch thought back and he sighed. “We have to move forward, but I want to warn you that down these passages was where I was snatched up and taken to Morna.”

“I think the warning of danger goes without saying,” offered Dorian. “Let’s go.”