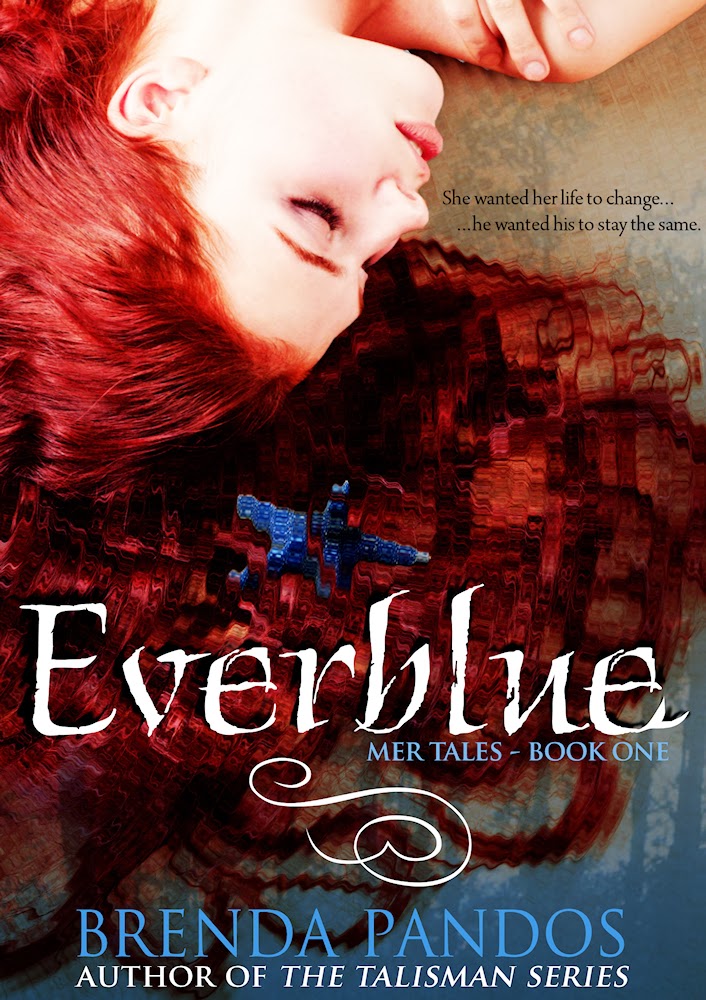 She wanted her life to change … he wanted his to stay the same.

Seventeen-year-old Ashlyn Lanski is tired of her boring, single life. Swimming and spending time with Tatiana, her best friend, are her only sanctuary. The girls plan to leave their drab lakeside town far behind for college, and Ash hopes to finally ditch her longtime crush for Finley, Tatiana’s twin brother. But when Tatiana and her family fail to return home after a family emergency, Ashlyn chooses to do something drastic to find them.

Finley Helton and his family are good at blending in as they run their sailing charter business in Lake Tahoe. But together, they guard an ancient secret. When a not so routine meeting forces Finley, Tatiana and their mother to return to Natatoria and Fin’s father on a dangerous mission, Fin can’t stay caged up for long.

Secrets lurk beneath the deep blue waters of Lake Tahoe, and a simple lifesaving kiss could change their lives forever.

“What’s wrong?” I asked and glanced over to where Tatiana looked, afraid her father might be storming down the beach towards us. Instead, a red Jeep rolled over the ridge and down the rocky path that separated our neighborhoods.

She tsked. “What does he want?”

My mouth parched as I caught a glimpse of Tatchi’s twin brother through his windshield. He wore his usual black baseball hat, and looked nothing short of adorable.

“Apparently.” She pressed her brows together and looked toward her house. “Let me find out what he wants.”

Fin parked and got out before she could intercept him.

My stomach flipped into a knot as I smiled and waved back.

They argued for a minute, but I didn’t catch what about. I stood, trying not to gawk, as I shamelessly adored his broad shoulders and beautiful blonde hair. Under the bill would be his piercing blue eyes fringed with paintbrush lashes—the ones that always melted my knees.

My crush started years ago, right after we’d met when we were ten—right on this beach. With a deep breath, I tried to relax and not dream of a relationship that probably wouldn’t be. As far as I knew, he didn’t think much of me beyond meaningless flirting.

Tatchi threw her hands in the air and stormed back in my direction.

“Drama on the home front. I have to go,” she mumbled as she snagged her blanket off the sand. “Sorry.”

Fin watched us, which made me even more nervous.

“Yeah, it should be fine. I’ll try to call later.” She smiled and gave me a hug. But more of an, “I’m leaving for a trip and saying goodbye,” tighter kind of hug. I grimaced, unsure what to say.

She left with a sigh and headed toward their house, brushing past Fin without even a look. Once she was out of view, Fin turned and instead of going back to his Jeep, he walked towards me. My pulse quickened.

Ashlyn stood awkwardly as I approached. Her curvy hips and wavy red hair took my breath away. For a moment, I caught her scent and hummed—honeysuckle with just a hint of chlorine from her morning swim. Briefly, I imagined us playing in the water. She’d give me a run for my money in a race.

Her green eyes darted away. “Not much.”

“Sorry I interrupted—” I pointed towards the imprint of my sister’s towel in the sand.

She pressed her lips together and suddenly all I wanted to do was kiss her right then and there. I took a deep breath and glanced at my feet.

“Is school going good?” I asked, kicking a rock.

“Yeah.” She shrugged and then shot me that look—one with a hint of yearning behind it. I couldn’t help myself. I stepped forward and cupped her cheek. Her skin was soft as a rose petal, but within her startled eyes I caught my reflection—my very selfish expression.

Her whole life flashed before me. This kiss I desired to give her would change everything—her dreams, her life with her family, her future. Innocent and trusting, she closed her eyes and tilted her chin upward in anticipation anyway. My soul protested, but I did the only thing I could—the responsible thing.

“You’ve got something on your cheek,” I said, wiping my thumb over her skin.

She opened her eyes and pulled away, her cheeks reddening. “I do?”

I stepped back and grimaced at myself. I was being one of those guys, the jerk who led girls on and toyed with their emotions.

“I’m going to go,” she said, rubbing her hand where I’d touched, and faked a smile. “See ya later.”

She quickly stumbled up the path towards her Grandmother’s house before I could comment, but I heard what she said under her breath. “I’m so stupid.”