(Start at the Beginning of the Novel) 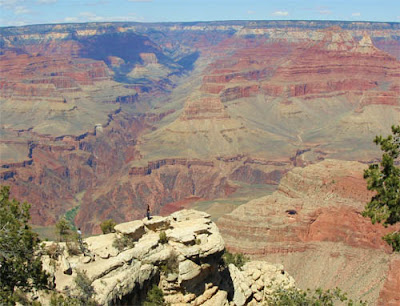 …follow him into exile. Or maybe some would-be enemy wanted to make certain he would never return.

Kavio climbed higher into the mountains. The peaks met like clapped hands to divide the rains of the world in half. All waters of the eastern fingers cascaded into a drought-dry landscape of sand- stone phantasmagoria—stone rainbows, stone islands, stone waves, striated stone flavors of pepper and cayenne. All the waters to the other side flowed west, through terrain sweetened by late summer storms, down, gently down through valleys of oak and golden poppy, down, gently down to coastal forests and the sea.
In the mountains, however, autumn had already given way to winter, and he found the pass already thick with snow, where he sacrificed a night and a day to lay a trap. He had to choose his spot, plan his moves against possible countermoves, dance a spell without making it obvious to any hypothetical observers what he was doing. The crisp powder proved a convenient medium for false footprints. By the next nightfall, he was ready. He cast his prepared illusion around a log to make it look like his sleeping form, and then he doubled back over his trail, climbed a tree, and watched his own camp.
The moon rose with no sign of any intruder. Once he heard scritching in the tree where he waited and looked up into the stare of a snow snake, camouflaged like a fall of snow on the branch. Their venom was quite lethal, he recalled. He glared at it until it slithered away to find its own damn tree. He took this living echo of his journey omen as a sign he wasn’t just trying to catch an enemy who existed only in his paranoid imagination. 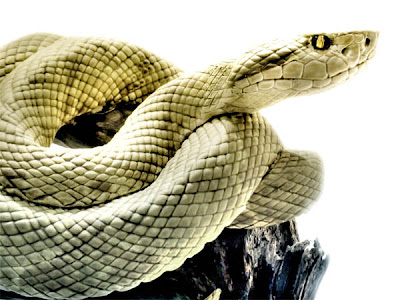 Then, close to midnight, he heard a twig snap below his tree.
Two masked Tavaedies crept into position, and, after exchanging a silent nod, rushed to hack apart the log he’d left in his sleeping roll. They cussed like drunks when they discovered they’d dulled their flint axes for no reason. In the dark, he couldn’t see their tribal marks, and might not have been able to guess in any case, since they both wore furs against the cold. He shadowed them back to their camp, a neat affair of two leather tents and seven canoes. The snow gave way to the ice-choked grasses of a frozen river. The ice was unbroken, and the grass tall enough to offer cover, so he followed cautiously, but something nagged him. Two men had attacked his sleeping roll, but there were seven boats.
Five more men cracked out of the ice in a circle around Kavio. Human, not fae. He couldn’t tell their tribe. Lathered with lard for warmth, camouflaged by mud and rushes, they were clumps of living marsh. They’d been crouching under a layer of ice no thicker than flatbread, breathing through reeds, waiting to spring their trap. Nets weighted with rocks dragged Kavio down while…