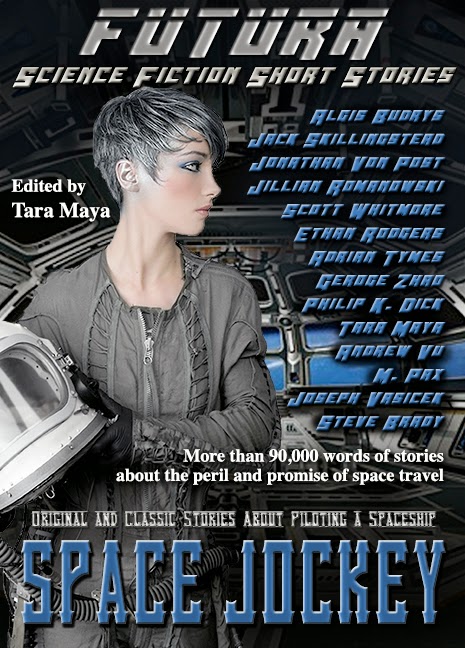 A science fiction anthology about that classic career of the future… space pilot.

A young pilot thinks he knows the cost of war. Until he opens a forbidden door…

If you’re piloting a cargo of convicts on Titan, you’re already in trouble. Things can still get worse.

After the war, humanity gave up dreaming of the stars. But not him.

Can a fleet of ships run by citizens stop famine from being used as a weapon?

Every time he traveled to another world, he lost a little more of himself. Now they wanted him to make one last trip….

Learn More about the Worlds in Space Jockey

Ethan Rodgers – Farsider
If you’re piloting a cargo of murderers and rapists on Titan, you’re already in trouble. Things can still get worse.
FIRST LINE: I take a long drag from my cigarette, watching the androids load the metal pod onto the cargo deck under the supervision of four armed guards….
Keep reading, “Farsider”

Steve Brady – Going Hyperdown
Was letting this institution turn his brain inside out the best thing he could do for everybody in the galaxy?
FIRST LINE: Right eye day: the left eye was covered today. With one eye, which meant poor depth perception even in 3-D, Djonn went through all the four-dimensional (hyper) kinesthesia exercises….
Keep reading, “Going Hyperdown”

Jonathan Von Post – Garrett Lisi’s Exceptionally Simple Theory of E8 Stardrive
An advanced stardrive can turn the universe inside out. But it’s still not as twisted as the drive for revenge.
FIRST LINE: As I squeezed into the cockpit of the first starship, I had one last question….
Keep reading, “E8 Stardrive”

Tara Maya – Food, Peace, Power
Can a fleet of ships run by citizens stop famine from being used as a weapon?
FIRST LINE: Peace is always maintained by power; the only question is whose power….
Keep reading, “Food, Peace, Power”

Jack Skillingstead – Dead Worlds
Every time he traveled to another world, he lost a little more of himself. Now they wanted him to make one last trip.
FIRST LINE: A week after my retrieval, I went for a drive in the country….
Keep reading, “Dead Worlds”

Jillian Romanowski – 2134
She was reunited on the ship with the boy she loved—but he was promised to someone else.
FIRST LINE: I’m going to be collected tonight. The inevitable has finally arrived and I didn’t even get to say goodbye to him….
Keep reading, “2134”

Philip K. Dick – Mr. Spaceship
How can you defeat living ships? With a living ship of your own…
FIRST LINE: Kramer leaned back. “You can see the situation. How can we deal with a factor like this? The perfect variable.”
Keep reading, “Mr. Spaceship”

M. Pax – Semper Audacia
She was the last one left. But she wasn’t about to give up.
FIRST LINE: The claxon blasted through the outpost. Leda vaulted onto her feet, reaching for the rings hanging above her bunk….
Keep reading, “Semper Audacia”

Win a FREE book if you can answer this question: In how many stories in Space Jockey does the hero physically pilot or ride in a ship, and in how many does the hero pilot the ship remotely?
EMAIL YOUR ANSWERS TO: contest@misquepress.com
Reviewers will be allowed a double entry in the contest. Sign up here for your review copy.