1. The Unfinished Song: Initiate (Beginning of the Novel)

(This is the Beginning of the Novel)

Dindi scanned the crowd, hoping to slip into the plaza un-noticed. Barter Hill swarmed with people because aunties from the three clans met here to trade every half-moon. A kraal at the bottom of the hill held aurochsen and horses. Interconnected rectangular adobe buildings created a square around the top of the rise. The old uncles, to suit their dignity, leaned against the wall on a log bench, under the shade of the eaves of the buildings, drinking corn beer, chatting amiably. They hid their thighs with waist blankets and caped themselves in shoulder blankets that reached the ground. Dindi slithered by them.
Unfortunately, the first person Dindi locked eyes with was Great Aunt Sullana. Though the whole plaza separated them, Great Aunt Sullana tore across the market like a tornado on the Purple Plains. She would demand to examine Dindi’s basket, and finding nothing in it except a kitten, pinch her cheek until Dindi stuttered some explanation. The natural and obvious defense would be to lie, but frankly, Dindi had always been a terrible liar. Her whole face ripened like a tom

ato, her eyes slid this way and that, she couldn’t convince a child honey was sweet never mind fool Great Aunt Sullana, who ate secrets for morning meal.
Evasion her only option, Dindi darted past a couple of elder women haggling over an exchange of vegetables for pottery. Married women, with their salt-and-pepper hair coiled in stacked rings atop their heads, sat with their wares on blankets arranged all around the dancing platform. Dindi wove a path around multifarious piles of tubers and bone awls, behind bunches of water gourds hung like grapes over racks of smoked venison. Aunties shouted and tried to call her attention to bargains by slapping her calves with horse-hair whisks.
Great Aunt Sullana changed course to track her. Dindi hopped behind a group of bare-chested warriors who mock-fought one another, to the annoyance of an auntie whose tower of baskets they upset. A gaggle of girls giggled at their antics. Great Aunt Sullana kept walking in the wrong direction. Dindi sighed in relief.
A slow drumbeat reverberated throughout the market square. The Tavaedies! No one could see the drum, but each beat shook the ground like earth tremors. Heads jerked up and eyes began to sparkle. Rattles and flutes supplemented the drumbeat. From a hole in the ground in a clear space just in front of the dancing platform, a line of masked dancers emerged. Each costume was slightly different, determined by the dancer’s color of magic and the dance the troop performed that day. A large headdress and a matching mask of either cloth or paint disguised each face. Each Tavaedi wore a costume entirely dyed and painted in shades of one of the primordial six colors. 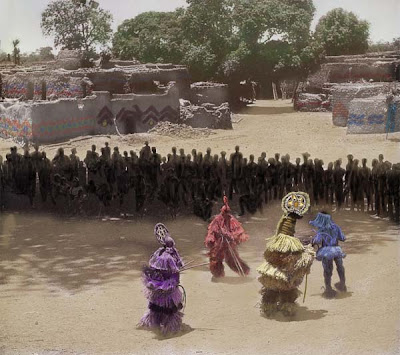 Dindi had never told anyone she aspired to become a Tavaedi. She wasn’t interested in reaping snickers or commiseration. Besides, what did she care what the others thought of her? She knew how hard it was, but she had a plan.

Author’s Comments
The dancing societies of Faearth are inspired by shamanistic dancing societies found in a number of different societies. I lived for a year in Cameroon, West Africa, (first in Batie then in Bamenda, for those handful of you who know Cameroon), and had the opportunity to watch the dancing of a group of shamans from a secret societies. It was fantastic. They wore costumes made in the traditional way, for the purposes of the sacred ritual.
The Hopi and Zuni also had dancing societies who practiced and performed in underground rooms called kivas — which you’ll find in Faearth as well. And here’s a video of Aztec dancers, just because they are pretty awesome.
You can find more of Toni Cogdell’s amazing work at faeryclan.co.uk and at toni-art.co.uk. She also writes and draws for faezine.com.