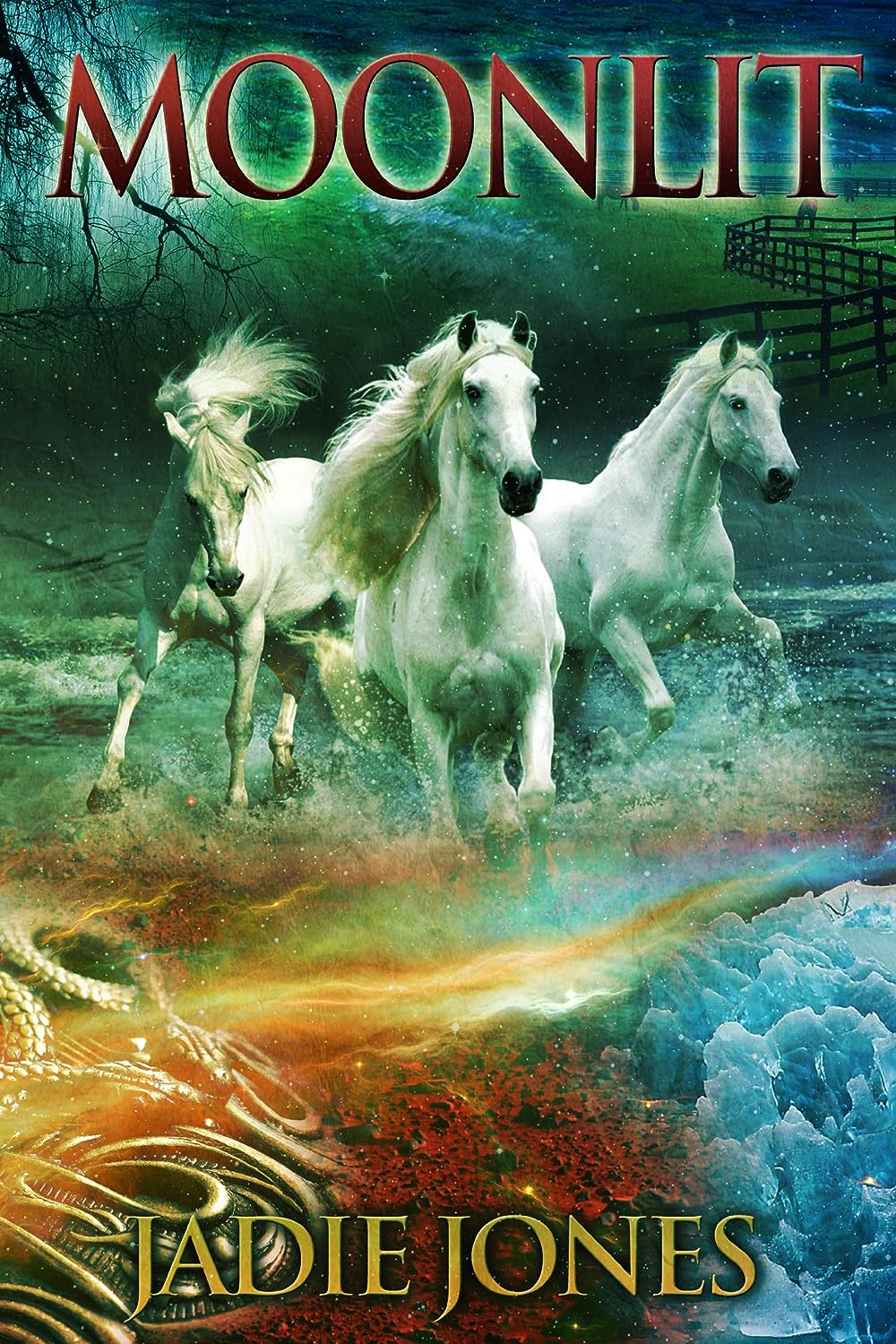 Eighteen-year-old Tanzy Hightower knows horses, has grown up with them on Wildwood Farm. She also knows not to venture beyond the trees that line the pasture. Things happen out there that can’t be explained. Or undone. Worse, no one but she and the horses can see what lurks in the shadows of the woods.

When a moonlit ride turns into a terrifying chase, Tanzy is left to question everything, from the freak accident that killed her father to the very blood in her veins. Broken and confused, she turns to Lucas, a scarred, beautiful stranger, and to Vanessa, a charming new friend who has everything Tanzy doesn’t.

But why do they seem to know more about her than she knows herself?

Moonlit is the first in a trilogy and is available on Amazon and Barnes and Noble.

The glow from the barn quickly dissolves into the inky night. Not a shred of it accompanies us past the mangled gate. But the dark offers little relief from the shadows that plague me in the light of day.

The full moon casts a blue glow over the rolling field, making the dark places that sway in the steady breeze look alive. I release the breath I’d been holding as we near the riding ring. Hopewell stands still as I lean from the saddle to let us through the gate.

Once we’re closed inside the safety of the lit arena, I take a quick scan of the tree line. The woods and their shadows are still.

“Paranoid,” I say, unwilling to admit to myself that it sounds too much like a dare as it drifts across the empty pasture.

I cluck to Hopewell and he strikes off in a floating trot. He stretches his neck and lets out a snort. We track a figure-eight pattern across the broad arena and then I move him up into a canter. His three-beat gait feels like flying. My eyes close in bliss as we sail down the long side of the ring. And then, a break in rhythm. The next two beats come too fast and his typically light step pounds at the ground. My muscles clench, locking my seat into the tack, and my eyes fly open.

His pulse skyrockets, thumping through the saddle. I search the dark in a long sweep, anxious to catch sight of something I can define scurrying in the brush. But the field is empty.

“I don’t see anything.” Panic raises my voice to an unfamiliar octave and every muscle tenses with adrenaline.

Suddenly, he charges for the railing, twisting his head so far to the inside of the ring that I can see the rolling whites of his eyes.

Whatever is scaring him is in here with us.

I brace myself in the tack and chance a look behind us. Horror charges through my body as I lock eyes with a dark, ghastly creature slinking along behind us. It lowers its saber head and opens a pair of wide, capable jaws. My breath stills in my throat as it lunges from its crouch. Hopewell spins and bucks, kicking the beast square in the chest and throwing me onto his neck.

Don’t fall! I cling to his mane as I try to right myself, but I can’t get my feet back in the stirrups.

Hopewell leaps into a gallop and races toward the end of the ring. The distance between us and the fence evaporates in seconds. I push him forward, silently begging him to ignore the routine barrier. He powers off the ground and sails over the rail. I sit up as he lands, and steer him towards the barn.

Without warning, he leaps sideways tossing me airborne. I cry out as I land hard back in the saddle.

Another animal races toward us from the side. The first creature is closing in from behind.