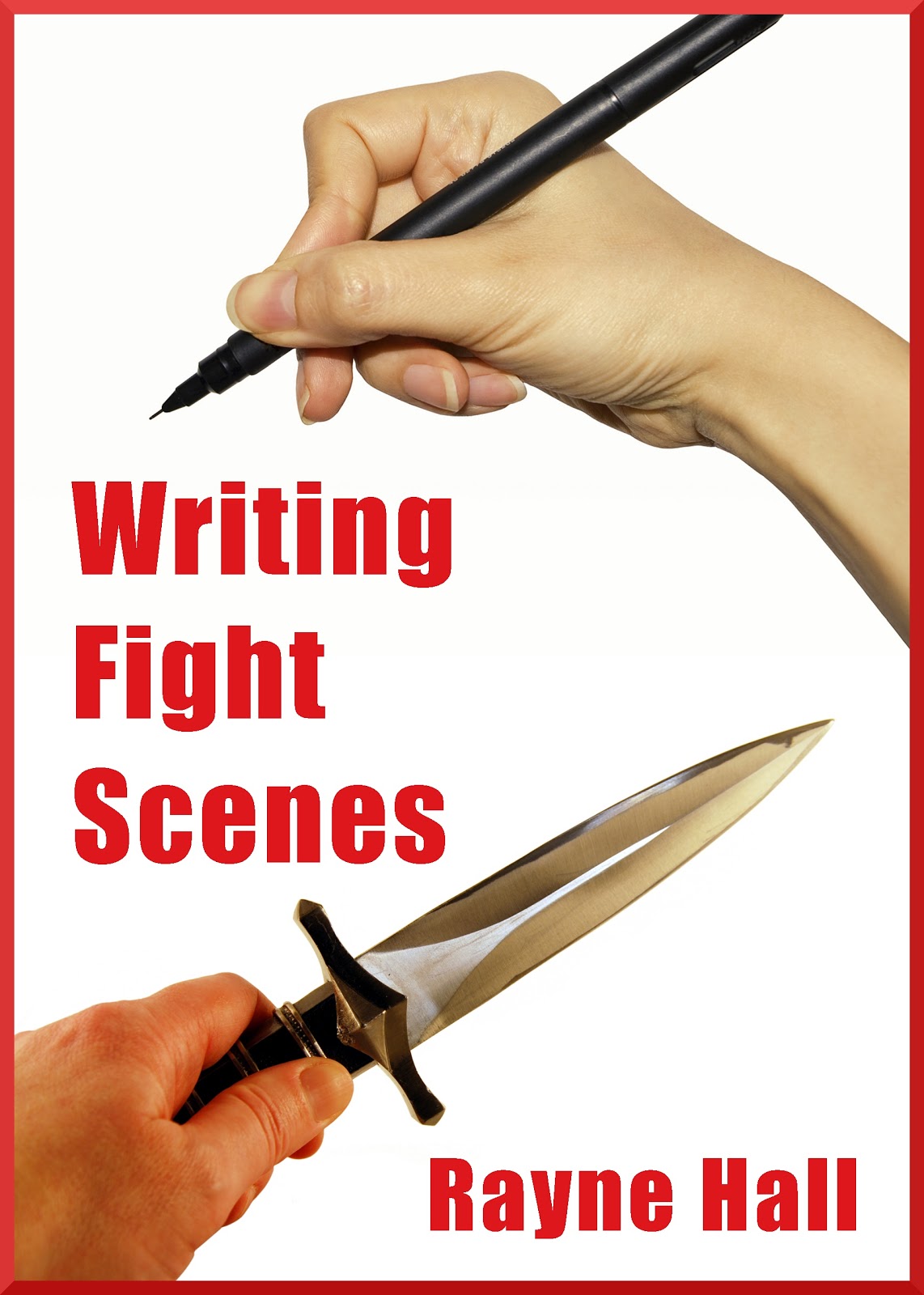 The biggest challenge in writing a battle scene is the point of view. To make the experience exciting and moving, it’s best to stick to the perspective of a single fighter. However, the individual soldier can’t see what goes on a few feet from him, let alone what’s happening at the other end of the battlefield or how the sun dyes the horizon bloody red.

Here’s a possible solution: Show the terrain before the fight begins, and have the general give a pep talk explaining the overall strategy. Once the fighting is over, show the battlefield and have your point of view character talk with his comrades about the implications.

Do you want to involve the reader’s emotions? Stack the odds against your heroes. The readers’ natural sympathies lie with the smaller army. The greater you can make the numerical difference, the better. The evil overlord’s army is bigger than the hero’s, and it is much better equipped, too.

Have you heard of the battle of Thermopylae (480 BC), when three hundred Spartans defended Greece against thousands of invading Persians? The Spartans knew they were going to die, and fought anyway, to gain time for their homeland to prepare further defences. Since then, thousands of battles have been fought – and forgotten. Thermopylae is remembered. The story has been retold in many novels, non-fiction books, and films. The incredible bravery against overwhelming odds still rouses audiences’ emotions. When writing your own battle scenes, use Thermopylae as your inspiration.

Battles don’t just happen: they are usually planned. At least one side seeks the battle and is prepared.

The generals plan a battle strategy in advance, and make sure that their officers know it. In the heat of the battle, it’s often impossible to change strategy or give orders. Sometimes, soldiers are still fighting when the battle has already been decided, because they don’t know that their king is dead or the enemy general has surrendered.

Often, the location decides the outcome of the battle. Generals choose the location carefully – and so should you, the author! If the battle takes place on a slope, the army uphill has a huge advantage, because it’s easier to fight downhill than uphill, and because missiles fly further. Each general tries to make the battle happen in terrain which favours his own army, and where the enemy can’t fully deploy his.

For example, chariots are fearsome on the plain, but useless in the mountains. Foot archers can fight on any terrain, especially in the mountains. The general who has many chariots will try to force a battle on the plain, while the general who has archers will try to lure them into mountainous terrain. If one general has a small army and his enemy has a large one, he’ll try to lure them into a gorge or other restricted space where they can’t move.

Armies are organised in units either by level of skill and experience (elite, veterans, novices, untrained peasants…) or by weapons and equipment (cavalry, infantry, archers, spearmen, chariots…) or both.

Before the battle, the general probably addresses the troops, firing their fighting spirit and courage. This pep talk may include depersonalising the enemy, because soldiers are more willing to kill monsters than to kill fellow human beings. It’s easy to kill a man whom you consider a menace to your children, and difficult to kill him if you think of him as a fellow human who loves his children as much as you love yours.

Noble thoughts and ideals have no room during battle. The thinker of noble thoughts and carrier of high ideals during battle won’t survive. If you want to show your hero’s nobility, do it when the fighting is over: perhaps he gives the fallen enemies a decent burial, or ensures that his captives get medical treatment and food.

Consider using interesting or extreme weather to make your battle scene unusual. Imagine pristine snow which gets trampled, becomes slippery, and stains red with blood. Or a strong wind which blows arrows off course. Or blistering heat and glaring sun. Or week-long rain turning the field into knee-deep mud, making it difficult for foot soldiers, let alone horses or chariots. Or fog blocking the view of the enemy.

At the beginning of the battle, both armies shoot missiles to take out as many of the enemy as possible before they get close. In a historical novel, clouds of arrows may darken the sky before the battle begins.

When the fighting is under way, describe only what the point of view character can see: this is probably only what is immediately before him, such as the enemy weapon stabbing at him.

To create excitement, mention sounds: the clanking of swords, the hissing of arrows, the pinging of bullets.

Once the fighting is over, the survivors count their dead, bandage their wounds and repair their weapons. In this section, you can inject realism..

Soon after the battle, there’ll be carrion birds (e.g. crows, vultures) feeding on the corpses. There’ll be humans (probably the victorious soldiers) gathering up re-usable weapons (because weapons are valuable) and looting the corpses. The battlefield is covered in blood, gore, and amputated limbs. The stench is awful, because in death, the bladder and bowels have opened. Plus, there’s the smell from injuries, not just blood (which starts to stink only after a while) but the content of stomachs and intestines from belly wounds. The stench gets worse after a few hours, especially if the weather is hot. After some hours, the corpses will be crawling with flies, and before long, there’ll be maggots.

If you’re aiming for great realism, you may want to spend several paragraphs describing the gruesome aftermath. If you want to create more light-hearted entertainment, it’s best to keep the aftermath section short and to skip the gory details.

Thank you for the post it is really helpful! I’m writing my main battle scene soon and I’ve been quite apprehensive about it but this post has given me a clear action plan on how to approach it. I think it is because originally I wanted several view points within the battle but I think it would make the battle too long and the emotional atmosphere would become boring.
Thank you!

Though I think if the battle scene is particularly long the author can switch viewpoints or spread the battle across several chapters with different characters.

I like how Alastair Reynolds does it in his books.