(Another!) Cover Reveal for STRAT – New and Improved!

You’ve seen the draft of the cover art for STRAT, but the real cover art is now complete! Same design, a bit more detail. Ta-dah! You may find this already available on some sites….If not, keep checking. It will be up soon! We’re holding off on the official release announcement until it’s live everywhere. 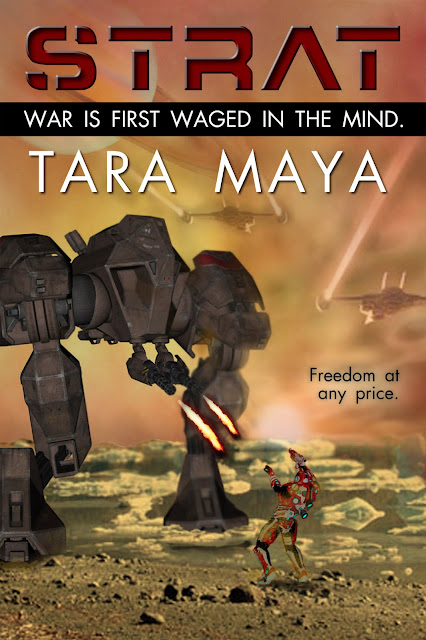 The hero stands on Neraka, a hell-class planet. The atmosphere, lake, and ice that you see are all sulfur dioxide. (It is one of the few elements that can exist in all three states at a certain temperature range.) This is where Charlie Cooper was born and grew up. All his life, he’s known the importance of wearing a kit’n’breather at all times, because even the smallest leak can result in sulfur dioxide parts per million rising inside your breather…. the result is pulmonary edema, pain and blindness, and eventually, death.

As in this excerpt…

Thirteen helmed Lords escorted me out to the center of the caldera: twelve lords from the legation, and Lord Ivess.
I knew Domany was right. They were unlikely to keep their word; but if there was even a chance I could save Sard from obliteration, I had to try.
We passed the frozen corpse of the woman who had taken her father’s helm and avenged her family during the jousts. All anyone had cared about her act of courage was that she had violated a stifling thousand-year-old code of law. Now I was to share her fate, for the same reason.
The legation offered Lord Ivess the honor of removing the faceplate and breather.  My hands were chained behind my back. They forced me to kneel in the sulfur snow.
He leaned close to me, although he did not need to be close to whisper to me over the link.
“You stole my daughter from me, and that embarrassed me,” he hissed. “I will enjoy your death greatly. I’m not going to take off your breather, though. A quick death would be too easy. I’m going to remove everything but your breather. I’m going to let you die slowly, and as you die, you can watch Tears-of-Gold die too.” He laughed. “Did you really think we would spare Sard after you contaminated it with your thralls who think they can be lords?”
“No,” I said. “I expected you to lack all honor, having fought you before.”
He kicked me face forward onto the ground. My jaw smashed painfully against my breather. He grabbed the back of my kit and jerked me back up to my knees.
“Then why did you surrender yourself to us? That was stupid.”
“I’m a Fredder,” I said. “I guess stupid is just a bad habit.”
The other lords stood in a semi-circle around us, a few meters away. They watched impassively as Ivess dismantled my kit piece by piece, until he ripped away the last underlayer, and left me naked in the bitterly frozen acid. As he’d promised, Ivess left on my helm, the cursed Helm of Brin, trailing tubes to my discarded, but functional, air pack, so I could still breath.
It felt as though I had been dipped into fire. My skin sizzled and buckled. Every inch of my body below my neck came alive with pain, raw unbearable pain. I screamed inside my mask. Through my tears, I could see a huge army of mechs, the combined cavalcades of the lords of the “peace legation,” advance toward Tears-of-Gold. They weren’t going to just let the city die of neglect, they were going to blast it straight to hell themselves.