Today’s guest is fantasy author Tracie McBride, renowned for her reality-twisting stories.
1. Describe the flavour of your fiction in six words.
Dark speculative fiction launching from reality.
2. What do you enjoy most about writing fantasy fiction?
The license to make stuff up!
3. Many people enjoy reading stories about undead creatures – ghosts, vampires, zombies. What do you think is the appeal?
I think the appeal differs from reader to reader. Some are fascinated by the possibility of a continued existence after death; some find the idea terrifying or abhorrent, yet feel compelled to explore or that terror.

4. Have any of your stories been inspired by mythology?
I have a story coming out in Dagan Books’ FISH anthology in January 2013 which was inspired by a Maori mythological creature, the taniwha. I use the term “mythological” loosely; some Maori believe that taniwha exist.
5. In “Last Chance to See” published in Undead: Ten Tales of Zombies (edited by Rayne Hall) the main character gets reincarnated for twenty-four hours to say farewell to her friends and family. Where did the idea come from?

“Last Chance to See” has a deeply personal origin. One of my aunts was diagnosed with terminal stomach cancer. The family organised a small reunion, and I drove with my three young children from one end of the North Island of New Zealand to the other to see her (you can do that in one day if you start early; New Zealand’s not very big). It felt something like a wake, only with the “guest of honour” still present and participating. There was more laughter than you might expect, naturally a few tears, some blackly funny moments as my aunt told us of her experiences going shopping for something to wear in her coffin, and even although it was a momentous and meaningful occasion, the banal necessities of life still had to be attended to. I got to thinking – what if everybody had the chance to say goodbye to their loved ones before they departed for good?

Thank you for answering our questions, Tracie. May 2013 bring you many more twisted ideas for great stories! 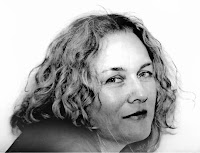 About Tracie McBride
Tracie McBride is a New Zealander who lives in Melbourne, Australia with her husband and three children. Her work has appeared or is forthcoming in over 80 print and electronic publications, including Horror Library Vols 4 and 5, Dead Red Heart, Phobophobia and Horror for Good. Her debut collection Ghosts Can Bleed contains much of the work that earned her a Sir Julius Vogel Award in 2008. She helps to wrangle slush for Dark Moon Digest and is the vice president of Dark Continents Publishing. She welcomes visitors to her blog at http://traciemcbridewriter.wordpress.com/.